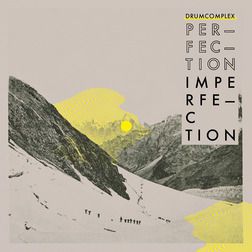 Background/Info: Drumcomplex is a German techno-driven project, which is has already been active for several years, having performed with world-wide famous artists of the techno scene, and having released an impressive number of productions on different labels.

“Perfection Is Imperfection” is inspired by the Japanese ‘wabi-sabi’ philosophy, which mainly deals with the idea of the appreciation of imperfection.

Content: The philosophical concept is a bit strange when you discover the titles of the tracks mainly referring to Greek mythology. But let’s focus on the music, which clearly takes off with techno-groovy parts. Drumcomplex is progressively evolving towards somewhat spooky passages featuring whispering female vocals (by Misstress Barbara) and rawer sound treatments.

Most of the tracks are driven by simple, but efficient sequences and the endless stomping rhythm of the beat. The work moves throughout a few transcendental parts and finally moves back to the rather groovy format of the debut part.

+ + + : The more elaborated parts reveal rawer sound manipulations definitely are the most exciting cuts of the work. “Aura” is the reference in the genre! This production once again reveals the power of dance kicks and efficiency of simple, but well-produced sequences.

– – – : The groovy-like debut- and final cuts will for sure get you in the dance, but doesn’t bring anything new and sounds like I’ve heard this one hundred times before. The secret and main strength of techno music is not hiding in an artistic creativity rather than a great sound production.

Conclusion: I’m more into the philosophy and concept behind this album that the way it has been transposed into music. It’s efficient and well-produced techno music, but without real surprises.

Best songs: “Aura”, “If You Can Be Mine feat. Misstress Barbara”.