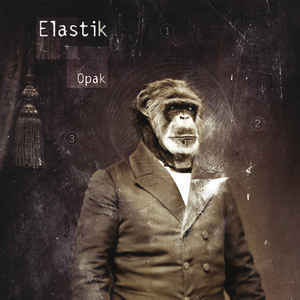 Background/Info: I got the opportunity to discover Elastik by previous releases. Driven by Thomas Prigent this French formation strikes back with a 6-track work, which more looks like a mini-album.

Content: Thomas Prigent invited a few guest singers to contribute to his new work. The sound is like the offspring between movie soundtracks and dark trip-hop reminding me now and then of Massive Attack.

There’s a noticeable difference between some of the singers, which also injects a different sensibility to the composition. Some vocal parts are soft and even fragile while others are more into a half spoken style. “Opak” also features instrumentals, which increase the cinematographic approach.

+ + + : Elastik remains an interesting formation, which on “Opak” reveals a more pronounced and exciting trip-hop approach. “Une Ville A Deux” is a fully accomplished piece, which will possibly appeal to fans of Massive Attack. “Ecrire” feat. Horror 4o4 caught my attention for the more experimental trip-hop style while the French spoken-like lyrics are pretty freaky. The soundtrack-inspired cuts are well-crafted as well and revealing intriguing moods (especially on “Station”).

– – – : Elastik is maybe missing a few little details that could make this band become really interesting. The cinematographic-like pieces are cool, but not exactly setting the world alight.

Conclusion: Elastik is a formation on which I already kept an eye on and “Opak” only confirms the growing maturity of the band. This band definitely deserves a break through.