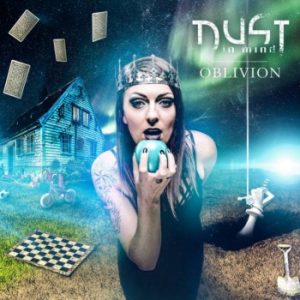 Background/Info: Hailing from Strasbourg (France) Dust In Mind took the metal community by surprise in 2015 unleashing the debut album “Never Look Back”. The 5 headed formation leaded by front woman Jennifer Gervais strikes back with their new opus revealing 10 new cuts.

Content: “Oblivion” is not exactly renewing the metal sound formula. The work deals with pure industrial-metal music driven by angelic female vocals. Most of the songs are violent and carried by solid, testosterone like guitar riffs, but Dust In Mind also reveals a more delicate side on a few beautiful songs.

Next to furious guitar parts the songs have been accomplished by cool electronic treatments. It creates some duality, which rapidly appears to be fully complementary. That’s exactly the same between female and male backing vocals.

+ + + : Dust In Mind is a pure sound aggression. It’s violent and the songs are often unpolished although sometimes alternated by softer and even fragile passages. “Oblivion” however stands for power and harmony. One of my favorite cuts however is the softer, but beautiful “Mrs. Epilepsy”. The front cover is pretty intriguing and a noticeable aspect because of the different elements, which aren’t easy to link with each other.

– – – : The power sometimes seems to bring the music into certain chaos. I’m missing a ‘melodic’ touch during the choruses.

Conclusion: Dust In Mind is definitely not innovating, but clearly claims to be one of the hardest formations fronted by a female singer in industrial-metal music.