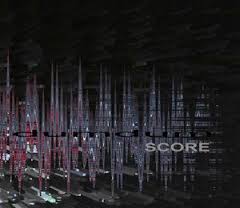 Content: Dumdum Score (DDS) is a British duo set up by Christopher Simpson & Michael Fielding. The band was active during the 80s, dealing with elements of industrial music and pure experimentalism. They define their music as ‘avant-garde’ or simply ‘non-music’.

The vinyl “Audio Sheep” was released in 1987 and became somewhat contradictory because of the ‘white label’ packaging on, which the people who had bought the record could decorate by included stickers. It reminds me of pure underground and I was not surprised to discover the band didn’t really feel concerned belonging to established music genres. They were simply experimenting with music and noises.

“Audio Sheep Redux” is not a simple re-release of this ‘early’ work, but a completely adapted and reworked version featuring 13 of the 14 original songs. It looks like the previously unreleased “The Walk” has been put in placed instead of “Trench”.

As I never heard of the band before I honestly didn’t know what to expect. The opening piece “Slab” took me by surprise. It all feels like a great industrial composition on which you’ll recognize the typical industrial spirit of the 80s. This track reminds me of early Test Department, which is more than simply a reference in the genre.

I was quite excited to discover the rest of the work, but I can already reveal that “Audio Sheep Redux” is much more diversified. The compositions clearly are influenced by industrial elements, but there also is a kind of rock element running through the work. It all becomes pretty experimental like resulting in a sonic puzzle featuring different influences. The vocals still are quite particular as they sometimes sound more like an extra instrument.

But the most fascinating aspect of the album consists of its dense atmospheric aspect, which sounds like the production would totally match with a visual performance. “Going Under Again” is one of the strongest examples in the genre. The mysterious sound atmospheres throughout the production are intriguing, holding the listener in their grip while facing an imaginary story.

The 2nd part of the work becomes more industrial-like. “Luck Love” moves into a kind tribal rhythm while the vocals are particular here as well. But the most captivating cuts are “West” and “Heads Of Tulips”. There’s a nice twist between ambient- and industrial ingredients, which once again evoke great souvenirs from the 80s industrial scene.

Conclusion: This is the kind of production, which will appeal for the true lovers of 80s composed industrial music.