Massive Ego are offering Side-Line readers an exclusive free mix download of “I Idolize You”, the lead track of their recently released debut EP “Noise in the machine”, and this to celebrate the video for the original version of the track was has hit 50k views on You Tube. 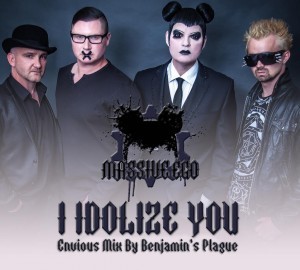 Remixed by Benjamin’s Plague the free download brings a more electro dance floor feel to the proceedings. The band are currently writing and recording their debut album for Out Of Line, which already features a track written especially for them by Boy George. Next year they take to the stage with a recently announced appearance at the Out Of Line Weekender 2016.

Check Massive Ego out on Facebook or at www.massiveego.co.uk and Benjamin’s Plague can be found on SoundCloud. The Out Of Line records act anno 2015 consists of Lloyd Price (synth), Oliver Frost (percussion), Marc Massive (vocal), Scot Collins (synth).

If you haven’t yet seen the official video for “I Idolize You” watch it below: