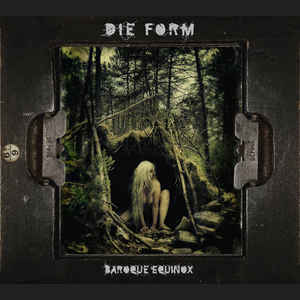 Background/Info: Philippe Fichot and Éliane P are back on track unleashing their newest full length “Baroque Equinox”. The previously released EP “Psychic Poison” was an honest teaser to this new work featuring 12 songs.

Content: The already familiar “Psychic Poison” also is the opener of this new album, revealing the familiar dark electronic style of Die Form. I have to say that this cut is not fully representative for the rest of the album. You also better understand why this song has been chosen as EP-title track. “Baroque Equinox” is mainly an experimental album on which Die Form takes some distance with the familiar and more danceable style of the band.

It’s not really a back to the roots, but let’s not forget that Die Form started as a pure experimental project. A similar spirit is running through “Baroque Equinox”, sometimes polished by the great vocal parts of Éliane P. Philippe Fichot mainly explores the decomposition and re-composition of sounds and noises revealing a pure vintage electronic format.

+ + + : Die Form has progressively evolved towards a more abstract and ‘difficult’ sound. It would have been maybe too easy and especially boring composing each time again similar dance songs. Die Form has renewed their sound by getting back to the experimental basis of the band’s origin. And Philippe Fichot clearly confirms to be a great sound architect. He manipulates sounds and noises like a real genius. Some passages are a bit soundtrack-like, others are into bombast. It’s a sonic puzzle where suddenly you’ll notice a short passage with a cello, like a symbol for the title of the album. There’s a nice twist between the artistic female vocals and the growling male parts. Die Form never has been that into duality and experiment!

– – – : If you like Die Form for their greatest ‘dance’ hits, you for sure will be disappointed. This album might announce a new era, which they already started on a few previous albums. The move is more abrupt on this album and I’ve to be honest, not that easy to accept!

Conclusion: “Baroque Equinox” is a sonic puzzle made of abstract electronics and tormented atmospheres. It’s without a shadow of a doubt one of the most ‘difficult’ albums from Die Form in years, which appears to be a real challenge!