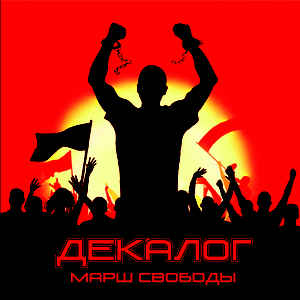 Background/Info: Set up in 1996 and hailing from the Republic Of Crimea, DekaLog has been introduced as being constantly in search of new sounds and influences. They previously released (2015) the album “Outsider “on Scentair Records.

Content: “March Of Freedom” is far away from the familiar electro-pop standards, but remains driven and inspired by electro-pop music. The kicks are quite danceable while the electronic parts are well-crafted and worked out. One of the main specificities of this band is the male and female vocal parts, which are all sung in Russian.

+ + + : “March Of Freedom” is an easy listening piece of music with a rather complementary aspect between the harder kicks, dark bass lines and heavy sound blasts at one side and the softer pop atmospheres at the other side. I already mentioned the Russian vocals, still revealing some duality between deep and grave male vocals and sweeter female parts. There’s no real hit featured on the album although there are a few cool cuts.

– – – : I think this band mainly has to elaborate the writing of the songs. A few cuts –and especially the softest ones, are easy to listen to, but missing some substance. Singing in Russian is a choice, but maybe not the best way to reach a wider ‘international’ audience.

Conclusion: I can’t say to have been entirely convinced by DakaLog although their work reveals a few cool cuts. Let’s keep an eye on this band!