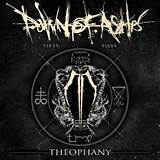 Background/Info: Dawn Of Ashes is a band I discovered during the glorious days of the now gone NoiTekk label. NoiTekk was a reference when it comes to discovering dark-electornic talents during the early millennium years. Dawn Of Ashes already was a kind of exception for their metal-influence supporting their work. After NoiTekk closed its doors, Dawn Of Ashes signed to another label and finally joined Metropolis while their sound never stopped to get more metal minded.

Content: “Theophany” is the newest brain child of Kristof Bathory. He again acts and sings like he is possessed and it doesn’t take that much time to get the impression that you’re entering into hell. The songs are driven by furious rhythms, empowered by epic bombast, recovered by obscure atmospheres and accomplished by torturing guitar sounds.

A few softer cuts feel a bit like a short intermezzo, but it rather sounds like a short relief before getting back to aggressive, freaky power outbursts. A final and more ambient-inspired cut brings us to the exit of the “Theophany”-inferno.

+ + + : “Theophany” is not just only power, but confirming the conceptual and somewhat spiritual approach of Dawn Of Ashes. It reinforces the disturbing aspect of the work, which moves further than only metal. It feels like a devilish rite and a merciless experience in ‘modern’ metal-music. The opening cuts will really blow you away; the power is driven to its ultimate state and it feels great.

– – – : I was not especially impressed by the somewhat softer and moody-like cuts of this work. Dawn Of Ashes clearly feels more comfortable and efficient when dealing with rough power. “Theophany” is an accomplished work although not the best one from this band.

Conclusion: “Theophany” sounds like the power from the underground, an imaginary sonic temple known for obscure rites featuring Kristof Bathory as the guru of a dangerous sect.

Best songs: “Equilibrium”, “Tribe Of Chemosh”, “Rise Of The Ancient East”, “Fire Of The Phoenix”.