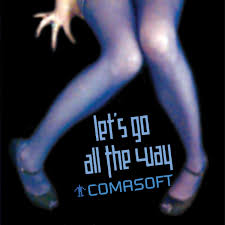 Content: Comasoft is not exactly a familiar name in the European electro-underground scene and yet they have already been active for a couple of years now and are quite experienced musicians.

The song “Let’s Go All the Way” may ring a bell to some of the ‘older’ electro fans and especially more to all of those who were already into music during the 80s. The band Sly Fox became maybe less famous than their hit “Let’s Go All The Way”, which has been covered by Comasoft. It seems that the band was already playing this song during live shows, but it has been now recorded as title song for this EP. The cover version is quite recognizable, but has been seriously boosted into a kind of industrial-rock cover while the easy recognizable chorus reflects a touch of pop. The sound is pretty cool and the vocals are quite charismatic.

We next get 3 new songs, which clearly are an indication about the future work of the band. I can’t really say that those tracks sound like B-side songs. There’s a solid pop-rock sound emerging from the composition while the choruses are quite catchy. Comasoft has found the right balance between pop influences and harder rock passages. It sounds a bit raw and remains pure underground music.

The song “Light As A Feather” definitely is their best new song. I like the deep bass line running through this cut, which also reveals a few technoid arrangements. But in the end it all remains pretty pop-minded and a real danceable song.

We next get 2 remixes of the title song by Method Cell and nTTx. I have a little preference for the somewhat EBM-orientated remix by nTTx.

Conclusion: This is a rather successful cover version of an old 80s hit, which has been reworked into a powerful and pure pop-rock underground version. The new songs by Comasoft are pretty cool as well.