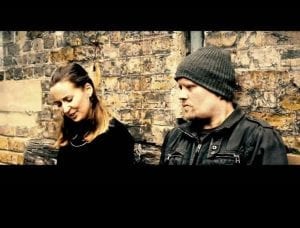 Jonas Rasmusson and Helena Wigeborn are Train To Spain. The name of their band is inspired by a song from the Human League. That brings us directly to 80s electro-pop and new-wave music, which is one of the band’s main sources of inspiration. The Swedish duo this year released their second album entitled “The Journey” on Sub Culture Records. It’s without a shadow of a doubt their most  accomplished and successful work. The songs are driven by catchy sequences, great melodies and danceable vibes. I’d a chat with Jonas and Helena.

Q: The band name is inspired from a Human League song “The Things That Dreams Are Made Of”. What did really inspired you in this lyrical extract from the song and how do you recognize yourself in this band name?

Jonas: I used to live and work in Spain and I love the country and I’ve always liked and been fascinated by trains. Growing up close to railroad tracks I trainspotted a lot. When listening to Human League the sentence ‘train to Spain’ just hit me in my face! Human league is a nice band, but not one of my favorites. So to name our band ’Like A Halo In Reverse’ would be too obvious. From a band that I like more.

Q: You both met a few years ago and found certain chemistry between the music written by Jonas and vocals sung by Helena. What makes this chemistry and how do you transpose it into songs and lyrics?

Helena: The chemistry mainly goes down to the fact that we both have a love for electronic music from the 80’s and 90’s. Jonas grow up in the 80’s and got into the music then and I was born in the late 80’s and got my influences from the 90’s. With a lot of creativity and different experiences in life we manage to merge the best of us, and that is what we think makes that specific sound of Train To Spain.

Jonas: In the beginning and during the first album I felt like it was just my instrumental songs that Helena liked and put lyrics on. Nowadays we try to work a different way. I now know what Helena likes in songs and I adapt to that. When making our second album we’ve started to make songs that Helena arranges on an acoustic guitar. I then make them electronic.

Q: So you clearly went through an evolution in the song writing, but can you give us more details and especially about the new album “A Journey”?

Helena:  After our first album was released we started working with a new producer, Patrik Hansson, best known as the vocalist from the band Vanguard. We agreed on wanting a ‘heavier’ sound and Patrik helped us out with that. Also, what is new with “A Journey” compared to our first album is that I’ve written four songs of the album, which I think brings a modern pop sound and gives the album a good mix of that and Jonas classic 80’s production.

Jonas: I feel it’s a very big different. Helena is much more confident when she sings and on this album our producer really liked the songs from the start and has put his touch on it. I also changed the gear from 80% software gear to 99% hardware gear. I think we still have our ‘Train To Spain-sound’; the sound that makes us special. Since we released the first album we have been playing in both England (London) and Germany, which have made us more confident and featuring a stronger stage act.

Q: Your music is catchy, melodic and has something ‘happy-sounding’ while the lyrics reflect darker and more serious themes. That’s an interesting contradiction, don’t you think?

Helena & Jonas: A contradiction for sure, but also something that makes the music more interesting to listen to. Life isn’t just happy or sad, it’s a mix of both and the lyrics that come out from Helena are what she experiences or a theme she has in mind at that specific time.

Q: “A Journey” is clearly inspired by 80s electro/wave-pop and that’s a source of inspiration you don’t hide at all. Why are all these bands still going back to the 80s and the origin of electro-pop and what personal touch did you add to your sound?

Helena: What we listen to in our teens really influence us for the rest of our lives. I mean, do you know people discovering new favorite genres when they are in their 30’s or 40’s? That’s why I think people can’t let go the music they listened to in their teens because that is what developed and characterized their identity, and we are not different. What we added is what comes from inside of us, our own creativity and experiences, and that’s something I think you can’t copy from other people.

Jonas: Well I think the 80’s is a very important era in the music history. The technology made a huge leap and that made the experimental/electronic music much easier to make! And there also is the mix between old and new technology; it’s a foundation! I can’t deny that my inspiration comes from the 80’s and 90’s music, but when I compose the music I just chose sounds that I like at the moment for that specific song. I guess that’s what makes our sound.

Q: Artists and labels often complain about decreasing CD-sales while more and more people are using streaming platforms and/or Youtube. You for sure feel concerned about this evolution, but is there any strategy to make things change? What’s the importance of promotion, live performances, getting reviews and interviews etc…?

Helena: As you describe in your question it is very important to be part of various and different platforms. What we are trying to do is developing good networks with radio presenters, club organizers and be as active as we can on social networks such as Facebook, Instagram, our own website etc. We are very happy and thankful for all the attention and good feedback that we get all around the world. It makes us want to do what we do even more.

Jonas: If we didn’t have all the platforms I don’t think that anyone would know about Train To Spain. So I think all the platforms are just great. I don’t think there are any ways to increase the CD/vinyl sales, unfortunately. The few people in the world (I call them enthusiasts) will still be buying CD’s and vinyl, but streaming is there to stay.