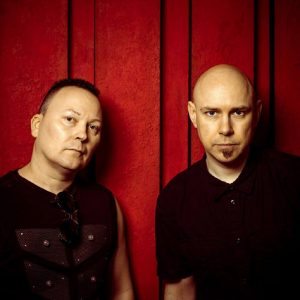 The Psychic Force is back alive! Twenty one years after their last album they earlier this year unleached their third full length album “Welcome To ScarCity” on Alfa Matrix. Set up by Jörg Charnowski and Michelle Christiansen the band became a respected and praised EBM act during the 90s. The albums “Mutilation” (1992) and “Traces” (1994) both released on KM-Musik became praised underground items. This new opus is maybe the start pf a new and successful chapter.

Q: What incited you to reactivate The Psychic Force after more than 20 years of silence and did you keep an eye on the evolution of electronic-underground music during this long break?

Michelle: After our second album in 1993, I started a DJ career and up to today I have played in a lot of scene clubs all around Germany. So I have naturally kept an eye on electronic-underground music all the time.

Actually Jörg and I only stopped making music for a few years. The work on the current album and on the EP which was released in 2015 started already around 2003, but we didn’t release the music back then.

We adopted a completely new workflow with software music production, which is a contrast with the 90s when we used mainly hardware. But to be able to produce, mix and master music professionally enough, which was our goal, it nearly took a decade. We had to build a new studio from ground up and learn all the skills to make it better this time than in the 90s.

Q: So it seems that the main changes/evolution concern technical elements, right?

Michelle: Actually the process of getting the sounds, melodies and rhythms somehow stayed the same, only the technical methods to achieve this changed dramatically. In the early days we used an Atari ST 1024 with Cubase and lots of hardware. Nowadays we make music on a Mac with software daws, but the soft synths still act like hardware instruments. So yes, it was and still is fun plus a great satisfaction to compose music and we still feel a big desire to create music.

Q: What can you tell us about the potential sources of inspiration (music & lyrics) behind “Welcome To ScarCity”?

Michelle: Well over the years we gathered a lot of inspiration from various music we listened to. In our early days we listened a lot to The Klinik and Skinny Puppy. Then over the years we also liked the sound of newer bands like Suicide Commando, Hocico, VNV Nation or Combichrist and so many more. This has surely influenced our way of making music, too. Sometimes we also feel inspired by film music and classical music. There are really lots of influences and I guess I can’t mention them all in this frame.

Q: Compared to your debut work I noticed a serious evolution in the global sound writing and the way of singing, but I’ve the feeling the album could have been even better with the involvement of a producer. Any reaction about this point?

Michelle: During the beginning phase of the new production we sometimes thought about that too. But we decided that we were better off doing everything by ourselves. First because we have much more control over every aspect this way and also because we want to be independent from any third person as a producer.

Finally, the financial aspect also played a role in our decision not to go that path. The Psychic Force was always a more or less non-profit project and so we don’t want to invest in anything else than in our own equipment, merchandise and things like that. This even means that we do not intend to go into an external studio as we don’t expect making money with our music anyway. It’s fun and it should stay fun. And so we don’t need a professional production to sound polished and commercial like tons of other bands.

Q: While your previous work got released on a small label (KM-Musik) you now joined hands with one of the leading formations of underground electronics (Alfa Matrix). It all looks like a late consecration don’t you think? What are your expectations?

Michelle: As I have already indicated, we don’t expect to be the next Skinny Puppy or The Klinik. We are really happy that Séba of Alfa Matrix took us under contract and that we’re now on one of the greatest labels in the electronic underground music genre, together with Front 242 and so many other great artists. We always liked the Belgian scene and a Belgian label really fits great to us. Alfa Matrix distributes their releases worldwide and as we already had an international fan base in the 90s, this also fits very good. So I hope we can manifest this great cooperation even more and become one of the well known artists of Alfa Matrix in the future so that everybody can listen to our music.

Q: Next to The Psychic Force I also remember some other projects you’ve been involved with like Nuclear Error and the more industrial-like Systemfehler. Do you have any plans to reactivate these bands as well or rework some songs?

Michelle: As Systemfehler consists of the same members as The Psychic Force, namely Jörg and I, we may also produce and release some more industrial-like music again in the future. But not under the name Systemfehler, because this name has now been taken by another music project for a movie in Germany. We might release it under a different name though.

Nuclear Error also involved Marc Ilsemann who is deeply into cycling sports nowadays and we don’t think he is interested in continuing the project. But who knows. Maybe some time this will still happen anyway.

Thank you a lot for your interview!