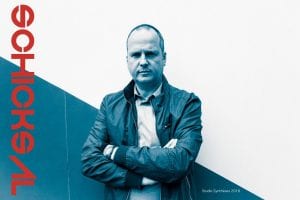 The ‘older’ electro fans familiar with EBM will probably remind Schicksal. This Belgian solo-project set up by Rudi Huybrechts released one single and noticeable 12” entitled “24 Hours”. This EP got released exactly 30 years ago now and got very enthusiastic reactions. Unfortunately no other official Schicksal release got ever released. This year the Belgian label Walhalla Records, which is devoted to good-old (Belgian) electronics recovered Schicksal from dust. The album “365 Days” got released on vinyl format and features next to the familiar songs from the “24 Hours”-maxi several previously unreleased songs. Schicksal is alive and answered a few questions about this noticeable ‘return’.

Q: Schicksal is one of these ‘forgotten’ electronic projects from the early 80s, which this year released the album “365 Days”. Can you remind us the who’s hiding behind this project and the way you got in touch with electronic music?

Rudi: My real name is Rudi Huybrechts. I was born in 1967 in Hoboken, a town near Antwerp. Imagine Hoboken was at that time as an old industry township with industrial artefacts, such as an old petrochemical abandoned plant, bankrupt shipyard Cockerill and a polluting chemical plant.

As a young kid I was already interested in electronic music. I went to the library to lend LP’s which helped me discover all kinds of music. And that’s where I first heard “Autobahn”. From that point on, nothing was the same anymore. I started discovering bands like D.A.F., Human League, Heaven 17. The release of Front’s “Geography” in 1982 is for me a true landmark. This was the first time where synth music had this kind of aggression, passion and groove. Front 242 used synths in a way which was never done before. And then of course there was the radio show ‘Vrijaf’ by Gust Decoster, every Wednesday afternoon. It is on Vrijaf that I discovered a lot of fantastic ‘Belpop’ and recorded it on lots of C90 tapes.

Q: The 12” “24 Hours” released in 1988 on Antler’s subdivision Subway Records has been your single official release before the album. Back in time Subway Records was devoted to the new-beat scene so what does it evoke to you?

Rudi: For me, the New-Beat period started a lot earlier than many think. During the late 80’s, some DJ’s in Antwerp nightclubs such as ‘Prestige’, ‘Berchem Palace’ and ‘Rudy’s Avant Garde’ in St.Niklaas started pitching songs and playing downtempo dance music. It was a time of decadence, so-called ‘m’as tu vu’ and no rules.

It is a coincidence that “24 hours” was released on Subway. In fact, it was Marc Grouls (resident DJ at Prestige Club) who played “24 hours” for the first time, after some stalking from me! The dancefloor went wild so the day after Marc picked me up at home to sign a contract with Maurice Engelen on the Subway label. In short notice New-Beat became hot, so hot that it became mainstream and unfortunately evolved in the so called ‘Nouga Beat’.

Rudi: It happened because of one man, Lieven De Ridder. There’s a Belgian underground community of people who are dedicated to the electronic scene. They are interested in minimal-synth, New-Beat and music which was played at ‘Liaisons Dangereuses’ (an historic radio show on free radio station SIS). Lieven De Ridder is one of the main influencers in that scene. His knowledge and passion for music, especially synth music, borders on the unbelievable. Lieven is the founder of Walhalla Records, a label that is specialised in releasing vinyl which has only been released on cassette before. Lieven and I got in touch, and started playing on his Radioshow ‘Wave Frequencies’ on Radio Centraal. The first Walhalla record was “Underground Belgian Wave Vol.l 1” featuring 2 Schicksal songs “Time“ and “Saturday”, previously released on the historic “Climax”-tape. Lieven had the idea to release a full album of Schicksal, with previously unreleased material. We got together again and chose representative tracks to cover 30 years.

Q: Back in time “24 Hours” got a very positive response, but how do you look back at the songs featured on it and what has been the impact of this release on your career as artist?

Rudi: The song “24 hours” itself was rather accidentally connected to the New-Beat sound; it was not my intension to create or compose New-Beat. I could have got probably more out of it, but in that time there was no internet. As an 21 year old modest student I was not really interested in the ‘music industry’ and let alone all the merchandising and commerce around it.

Rudi: The A side of “365 Days”, together with “Saturday” on the B-side is from the early days and made with analogue gear. I bought my first synth (with money I earned working as a student) in 1983, at the age of 15. It was a Roland SH-101. It felt like the world got open in front of me… I started compiling the instruments you require as a solo synth-artist; new ones and most second hand instruments. My first drum computer was a Boss DR 55 for example. I am a fan of Roland, especially the TR series. But buying something new meant that other instruments had to be sold. Can you imagine I once sold a TR-909…if only I knew at that time… My favourite configuration was the Roland SH-101, the DR-110 drum computer,  the Korg Poly 800 and Boss DSD-2 sampler/delay. Picture yourself, a small bedroom (3 x 2,5m), the gear on the bed because I’d no space, a cassette deck with hifi deck, mixer, microphone and me trying to get control of it all (lol) That’s how many of the Schicksal songs were created.  The other songs on “365 days” are more recent. Today I create my songs on PC with Reason and a Nektar midi keyboard. But last year I got a Korg MS-20 (!) as a birthday gift from a good friend and recently I bought a Korg Volca Bass. So I’m back into the analogue gear! The first demos are a fact, but I’m still trying to sync them all together. The pitfall of creating music on computer is that you can lose yourself for hours in looking for that specific sound instead of being creative. For me ‘less is more’.

Q: A lot of things have changed since the late 80s; I’m referring to instruments, recording techniques, music styles, labels, promotion, distribution, media, social media, streaming… Do you feel you’re still living in the same world as 30 years ago and what’s your perception about all these evolutions/changes?

Rudi: Indeed, in 30 years of time, a lot changed! Every change has his advantages and disadvantages. In fact it is much cheaper today to make electronic music than it was in the 80’s. Also the possibilities/sounds/samples are endless. With Facebook and Youtube you have, as an artist, much more opportunities to share your music and find allies. If the internet wouldn’t exist, the “365 Days”-release wouldn’t have been released! On the other hand I today miss some artists who’re experimenting and thinking outside the box. The bulb was not invented by improving the candle if you know what I mean… All MTV and big radio stations play the same EDM-shit, over and over again. Youngsters, stop looking at your smartphone and create your own revolution!