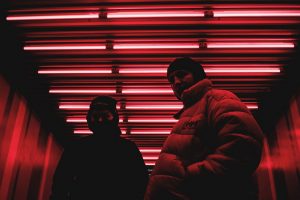 New Frames is the meeting between Mathis Mootz (The Panacea, M²…) and David Frisch. The debut full length “Resistance Through Rituals” has been released on Hands and reveals the perfect sonic symbiosis between industrial- and techno music. I got in touch with the Berliner based duo.

Q: A traditional question to take off is to know how you guys get in touch with each other and what incited you from a pure musical- and maybe technical point of view to create New Frames?

Mathis: I met David via a friend of mine who studied with David. He knew of my other musical projects. We first started to work together on my range of The Panacea-merchandise, I liked that, making music together felt like a logical step.

I knew I wanted to expand into techno and David’s expertise with analogue equipment helped me a lot to understand the structure and arrangement of a techno track.

Q: Mathis, tell me if I’m wrong, but I got the impression you didn’t release that much new stuff during the past few years. What happened and what does this new project mean to you –compared to all your other projects?

Mathis: That is correct. Around 2005 I started touring like hell so there was less time to work in the studio. Often I’d leave on Thursday to return on Sunday night, having to take off the entire Monday due to just being physically exhausted.

The birth of my daughter 2 years ago was another main reason to spend less time in the studio. I felt I wanted to be with her as often as possible, and especially because that’s the time a child needs their parents most of all.

With New Frames I have been spending more time in the studio this year, as it’s just so much fun for me. We work with a clean slate on every track, we like to experiment and that makes all the excitement.

Q: I’ve to be honest, I’m not familiar at all with David Frisch! Can you briefly introduce yourself, but I’m interested to know your perception about music and more specifically about industrial- and techno music, which both are influences running through New Frames?

David: I’ve been working on different electronic music projects since 2010. After moving to Berlin four years ago now I’ve gotten deep into collecting electronic instruments and effects. Through my experiences with modular synthesis grew an algorithmic approach to music, that translates very well into techno. Techno provides a supporting framework, while the industrial side introduces elements that try to take the listener out of the same. I think this dynamic makes working between those two genres exciting!

Q: Your label (cf. Hands) introduces the album as being ‘inspired by the thriving techno culture of the German Metropolis’ which is Berlin. What makes Berlin that special and maybe a bit visionary when it comes to music and especially techno music?

Mathis: I have been to techno-parties elsewhere in Europe and it’s something you can’t compare to Berlin. The audience is completely different. In Berlin it seems as if this scene encourages you to be different; in Belgium for example, I felt as if there was no difference between my audience (for The Panacea), and the audience I saw when I was traveling with my friend Vatican Shadow, other than maybe one year of difference (the d’n’b audience seems to be somewhere in between 16-22 these days….).

In Austria I played with Tommy 47 and it was the opposite there. 18 year old teenagers trying to get girls in the under crowded main room, a dedicated fan-base in the bunker-esque and tiny second floor where I played as The Panacea. I truly believe this city, due to its history, lives and breathes electronic music. We have many friends in the techno business and many of them know of The Panacea project, which serves as a good door opener. I find it highly inspirational to talk to artists from different genres, and artists you can meet when you live in Berlin.

Q: “Resistance Through Rituals” is a great and professional production so tell us a bit more about the way you composed this work and the equipment, tools and tricks you used?

Mathis: No tricks! Just knowledge and hard work. It’s not a secret I work in Logic for ages now. Often one of us develops an idea, the other adds whatever comes to his mind in terms of sound design or structure. Eric van Wonterghem’s mastering certainly helped us as well, he is just such a professional engineer.

David: I work in Ableton, so whenever we transfer ideas, the infinite possibilities of automations and changing up settings become concrete. While this tends to feel like a technical disadvantage, I believe it helps us to work effectively and form strong ideas. In the digital realm the challenge is making the right choices.

Q: What brings the future for both of you? Any new projects and releases in the pipeline and what might we expect from New Frames?

Mathis: Next in line is our FUTURE9596 release on Continuum Series 91-98, also a Hypnoskull Remix by New Frames that will be featured on his upcoming record and we are launching a new label that will kick off with a New Frames 10-track Tape and music by some of our friends active in the techno business.

Since you’re here … … we have a small favour to ask. More people are reading Side-Line Magazine than ever but advertising revenues across the media are falling fast. And unlike many news organisations, we haven’t put up a paywall – we want to keep our journalism as open as we can. So you can see why we need to ask for your help. Side-Line’s independent journalism takes a lot of time, money and hard work to produce. But we do it because we want to push the artists we like and who are equally fighting to survive. If everyone who reads our reporting, who likes it, helps fund it, our future would be much more secure. For as little as 5 US$, you can support Side-Line Magazine – and it only takes a minute. Thank you. The donations are safely powered by Paypal.
Tags: Berlin, New Frames