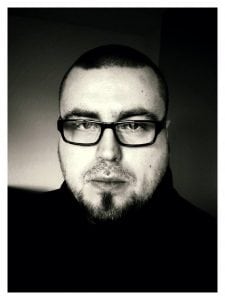 Michael Belletz and Sebastian Schulz started making music together in 1997. The early compositions were inspired by EBM, but quite progressively the German duo started exploring new sonic horizons, which finally became IDM-like. Michael Belletz remained the single member on board and has already released a new opus entitled “Aversionen”. The songs reveal a sophisticated and intelligent writing with a great vintage flavor on top. This work released on Hymen incited to me to get in touch with Michael.

Q: Mnemonic has been set up in 1997. What have been the main facts in the band’s history so far?

Michael: After 2 demo releases, the first regular album “Identifikationsstörung” was released in 2001 and three years later the second album “Konstruktive Vergangenheitsbewältigung” followed. Both albums were released by the Belgian label Alfa Matrix and were still very much bound to EBM/electro elements as well as vocals. In 2006 there was a break in style, the vocals disappeared and our music was clearly influenced by IDM. For new releases, we have found a suitable partner, he French label M-Tronic.

After much deliberation, we established our own label Halbsicht in 2008, on which the further 4 Mnemonic albums were published. After the album “Denkmodell” Sebastian left the project and since then I’ve been taking care of Mnemonic on my own. In 2016 and 2017, Sebastian and I came together for 2 gigs to present Mnemonic live for the very first time since we’ve established the project. The album “Result No. 7 “again offered a break in style and was the first step into analog-sounding world.

The album “Moral” appeared as a co. release between M-Tronic and Halbsicht. In 2018, the current album “Aversionen” followed on Hymen.

Q: And what kind of album did you want to accomplish on “Aversionen” plus what are the aspects of the composition you especially like?

Michael: “Aversionen” isn’t influenced by a certain idea or shape/type. Being true to myself is certainly a high premise. I like the complexity and sometimes catchy song structures. I was successfully able to draw a rich musical landscape, I feel very comfortable with. That’s a point which isn’t that easy in several of my works.

Q: You already mentioned the use of anologue equipment, which is a noticeable element on the new work. What makes the magic composing music with analogue equipment?

Michael: In the last few years, I’ve developed a certain fascination for analogue electric sound, somehow I call original. It adapts meaningfully to my current mood and offers me, with its many facets, a lot of implementation possibilities for my ideas. I’m attracted by unclean, flawed, detuned sounds, as well as flawless, nuanced sounds. I don’t care, if I have a real instrument or a plug-in ‘between my fingers’. The development of software instruments has improved incredibly over the last few years, so now it is possible to generate very good ‘analog sounds’ on the computer.

There is something in me, that can’t escape the spectrum of these sounds. This has always remained in me, but only came to its best on the last albums. I make music in a rather unspectacular and traditional way. I rarely change or modify sounds with the help of plug ins. In my opinion that destroys the real feeling.

Q: The title of the album is quite intriguing so what is “Aversionen” all about? What have been the main elements that inspired you and what does the front cover stands for?

Michael: As on all mnemonic albums, the specification of the album name, as well as the assignment of song titles, has only limited relevance. I’m just trying to make the songs subject of discussion, but of course, everything in context of a field of my interests. But in principle, very superficially, rather directly as profound.

I still do not see myself as a preacher of good and evil. I prefer to keep it short and leave the words to others. This creates a certain freedom in which the consumer has the opportunity to interpret itself.

Mnemonic has been working with graphic artist ‘Qasot’ since the beginning, who is also the head of Halbsicht. He manages to translate the musical mood into pictures. However his exact intentions, only he can put into words.

Q: You’re one of those artists who takes care to create intelligent and unique sound treatments. What are your main sources of inspiration and eventually references when it comes to sound creation?

Michael: I can’t specify certain sources of inspiration that influence my work. I rarely let myself become driven by external environmental influences, movies and so on. If there is a trigger for my activities, surely it is the music of other artists. These I don’t try to copy, they are more a key to some locked doors in me. I trust in my good feeling. It’s more of an inner urge that makes me bring sounds into certain structure. It’s a sublime feeling to force sound into patterns. It’s almost like touching sounds and shaping them according to my ideas and wishes. And when everything merges together, something that has never been heard before in this constellation, results. This is for me, a total fascinating moment.

Q: Considering different aspects such as sound creation, equipment, collaborations with other artists etc… how do you imagine the further releases of Mnemonic and what do you want to accomplish?

Michael: I can’t look far enough into the future to say how Mnemonic’s music will develop. During the past few years Mnemonic has been several times through a ‘musical metamorphosis’  and may do so again. Maybe I also experience a kind of stagnation?

One thing I can say with certainty, the upcoming album will move on the path taken in recent albums.

Since you’re here … … we have a small favour to ask. More people are reading Side-Line Magazine than ever but advertising revenues across the media are falling fast. And unlike many news organisations, we haven’t put up a paywall – we want to keep our journalism as open as we can. So you can see why we need to ask for your help. Side-Line’s independent journalism takes a lot of time, money and hard work to produce. But we do it because we want to push the artists we like and who are equally fighting to survive. If everyone who reads our reporting, who likes it, helps fund it, our future would be much more secure. For as little as 5 US$, you can support Side-Line Magazine – and it only takes a minute. Thank you. The donations are safely powered by Paypal.
Tags: EBM, M-Tronic, mnemonic