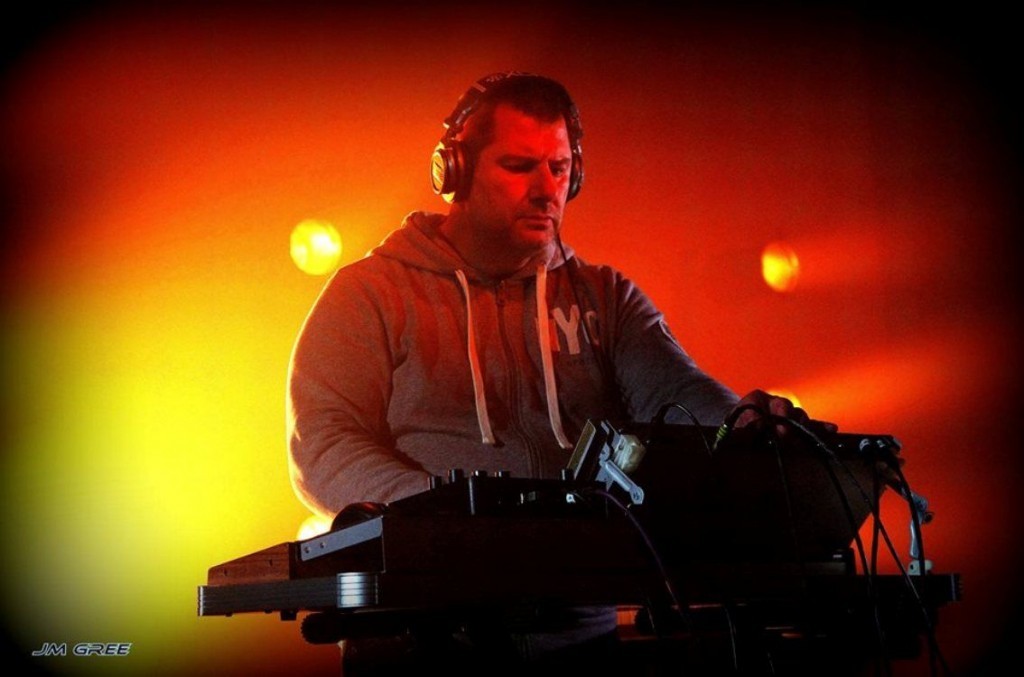 Rémy Pelleschi is a French artist based in the word-wide famous city of Cannes. He set up Mlada Fronta in the early 90s and thanks to a common friend I remember to have heard the early stuff of this band, which originally got influenced by the EBM of Front 242. Pelleschi makes me think to a painter like Pablo Picasso who got different periods in his work. It exactly happed the same way with Mlada Fronta, which progressively joined the wider fields of industrial music. He accomplished multiple visionary tribal-industrial & trance-minded work. The last few albums saw him exploring technoid fields, which are still mixed with industrial elements. His newest opus “Outrun” is a new and fascinating work, which has been released on M-Tronic. Time for a ‘click interview’ with this great musician and producer.

Q: You are already active for more than 20 years in this scene! How do you analyze your evolution as a musician & producer from the early beginning till today?

Rémy: As a musician, it’s very important to have challenges. During the last 20 years, I always wanted to print my sound and my vision on each album. Even with my last album “Outrun”, I still try to develop a concept, an idea giving more sense to the music. Evolution is something natural for me, my greatest inspiration remains music and movies. Besides I like the idea to merge the past with the present, I keep on composing with old synths and new audio tools.

Nowadays, I listen more and more to artists from the electro and synth-wave scenes, if the songs make me move and have an impact, no matter what kind of music it is, I will listen to it countless times and I will spend every time a great moment, which is in line with my activity of the day. As I listen to music a lot, it always ends up to influence me and as a result it opens more doors than I might have thought at the beginning, I don’t like to be closed to a particular genre .

What matters to me is what comes out  needs to be effective and spontaneous and that feeling persists after many listens in my studio. When composing “Polygon” and “Outrun” this is where my artistic approach has changed, a musical approach less ‘mental’ and ‘physical’, which preserves instinctivity in the composition, with the desire to highlight a sound signature, a universe which is specific to Mlada Fronta.

Now if we speak about my evolution as a producer, before I was thinking to compose with musicians only and now I compose alone by using a computer and synths.

This evolution could be considered weird, it’s right… but i must say that everything is faster when i use my DAW, not only for composing but also for mixing. It’s more effective in my opinion. In the 90s it was unthinkable to do what we can do with a computer today.

Q: It’s interesting to see that you evolved from a rather EBM inspired debut till more industrial & tribal music while your last albums became more a kind of industrial-techno. How do you explain the different periods in your career?

Rémy: Mlada Fronta is a project with a lot of changes. There isn’t only one kind of music that I appreciate, it’s more a question of vibes. No matter if it’s electronic, house, techno, industrial or even jazz, it’s only music for me and only what I could feel that is the most important thing to me. This is a natural instinct and I always use this approach when composing music.

My music is evolving since the beginning and finally this is why I wanted to compose such album as “Polygon” or “Outrun”. Both albums perfectly reflects my mind and visions of nowadays !

Q: What kind of album is “Outrun” all about and what’s hidden behind this fascination for ‘speed’?

Rémy: “Outrun” has several meanings in my mind. At first it’s a flashback of my teenage years, when I spent so many days in video games centers, I was a real video games addict and “Outrun” was one of my favorite one !

“Outrun” is an audio concept of merging modern materials with retro materials… I liked a lot this idea to compose modern electronic sounds by using synths that could remember the culture in the 80’s/90’s… the music but also the Cinema! John Carpenter was a big influence in my music composing. The cinema remains one of my main influences when I compose… for example “Trainspotting” movie was a real electroshock! Same thing with “Lola Rennt”, which is a funny and pleasant movie with an excellent soundtrack. If you listen to all my albums, there are always some references to cinema, and “Outrun” is no exception to the rule !

And finally “Outrun” is also about the speed concept, a sort of way of life by living everything fully, whether you are ignited to the dance floors or riding your hot wheels, race car or motorcycle, do what you like to do fully with no limits, no rules… Myself I am a biker, I like a lot the beautiful old cars or motorcycles and I keep this feeling deep within me!

When I composed the “Outrun” album, I could imagine a ride soundtrack with plenty of landscapes in my mind, and the speed providing unique sensations. This album shares my feelings a bit with all those who are passionate about cars, fine mechanical, motor sports, speed, sensation seeking to exist!

And then the music is a super ‘fuel’ to bring color to this experience !

Q: As a producer, what’s your opinion about the current evolution of bands recording and producing their work from start till finish in their home-studio?

Rémy: Home studio setup works well for all the bands composing electronic music or merging electro sounding with acoustic instruments, if you know very well how to use a computer, your DAW and every plug-ins efficiently, you can do a good job, no doubt about this. On the market there are some excellent sound cards with great converters that are not that expensive, a nice pair of speakers (Focal), a good monitor headphone (DT880 Pro for example) and let’s go! Later if you can add at your setup some analog synthesizers and filters, it’s very interesting to merge the two worlds (digital and analog equipments and process), this is in my opinion the best combination.

You have to ask yourself which sound you would like to get! If your musical project consist mainly in acoustic instruments, the better is to go to a recording studio for the outtakes/recordings. The musicians can think only to play without stress and the recording engineer will be here to catch the best during this step. But what’s interesting later is that the band can do the mixing at home, it’s entirely possible to get a great sounding at your home studio.

Where everything becomes more difficult for musicians is the mastering process. At this step, I strongly recommend to work with a mastering engineer who could add more perspective on the tracks, he could add its skills, and most of the time the result will be better than i the musician try to do the mastering by himself.