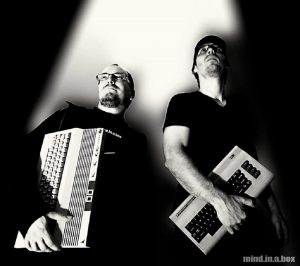 Mind.In.A.Box has released its new album “Broken Legacies” on their own label THYX Records. It’s a new sonic voyage throughout futuristic- and psychedelic electronic-pop fields. The Austrian band set up and driven by the creative spirit of Stefan Poiss became an instant success after their debut work (cf. “Lost Alone”) released in 2004. Every new production only increased the recognition of the critics and the enthusiasm of the fans. I got in touch with Stefan Poiss to know a bit more about the new work.

Q: “Broken Legacies” is the newest Mind.In.A.Box album, which took 2 years to get achieved. Can you tell us a bit more about the procedure and the way it all happened to compose this work?

Stefan: There was no need to rush anything. I mean in the end only the quality counts. It just has to be as good as we can make it. So we really spend a lot of time fine tuning the album till we felt it was done.

For this album Josh Kreger wrote all the lyrics and also the story and I’m extremely pleased with it. He did a phenomenal job. But I expected nothing less from him if I’m honest.

Q: Are there some aspects of the production you wanted to improve? Or maybe change? And are there innovating elements running through the album as well?

Stefan: Some time ago I invested in new speakers and thats the first mind.in.a.box album I could mix on them. They are just amazing and they helped me a lot. Productionwise I still work like always. Adding stuff and removing what sounds bad.

Q: “Broken Legacies” has been introduced as ‘an album clarifying several major themes from previous albums’. It only becomes more confusing to me, so what is it all about?

Stefan: Yeah its not easy isn’t it? If you really want to understand it you have to read through all the stories we published, maybe several times. But even then I guess you have to ask me some questions.

“Broken Legacies” goes back in time about 20 years ago. It was even before “Lost Alone”. The Friend is this time our protagonist. He was the guy Mr. Black killed on the “Lost Alone”-album in the song “Forever Gone”. But he is not really gone. Don’t tell it to anyone.

Q: What does the title of the album reflect and how did you transpose this content into the artwork and the music?

Stefan: The Friend designed a system what the Agency is using to control everything. At that time he thought it was a good thing, but then he realized what he has done and joined the Rebels. Since then he is trying to repay his dept.

All the artwork was painted by Polina Sofronova. She is an unbelievable good painter. I Was very glad to had her onboard.

Q: You clearly are not a ‘typical’ electro-pop band so what’s your perception on electro-pop and where do you place M.I.A.B. on the map?

Stefan: Mind.in.a.box is more like an electronic music-movie for your mind. It’s more complicated but it still has some electro-pop elements. Its more soundtrack orientated.

Q: I don’t want to compare M.I.A.B. to another band because you simply are incomparable, but for the very first time I hear atmospheres, arrangements and even the vocals reminding me of Michael Cretu (Enigma). What makes your sound that ‘special’ and ‘different’ from other bands and did you find inspiration in the work of Cretu and/or other artists/genres?

Stefan: Cretu is for sure an amazing producer. I liked a lot the album what he released with Peter Cornelius, a famous Austrian singer years ago. I think our understand for music is like everything else branded in our childhood. And I listened mostly computer music from the demo scene at that time. Thats the reason I think why mind.in.a.box sounds different. You want to arrange the music-puzzle pieces like you learned it in your childhood.