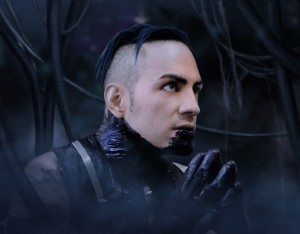 C-Lekktor became the big next Mexican dark-electro sensation after Hocico while Circuito Cerrado is rapidly growing towards the top of electro-industrial music. What do both bands have in common with the trance-minded Kromak? All of these bands are driven by the creative spirit and passion for music of Markko Barrientos Sanchez. This guy is not only a talented artist, but also a real nice and accessible person. I’m keeping an eye on his work since his early debut and he never stopped to impress me by improving the global aspects of his work.

Q: What incited you to make music and tell us a bit more about your musical background?

Markko: The passion for the music I like! I’ve been listening to this kind of ‘underground music’ for such a long time now (28 years). All over the years I’ve learned that music is one important fact in my life.

About my background as musician, I can tell you that I never went to music academy or something like that. I guess it is something running through my blood…

Q: Hocico definitely is the most famous Mexican formation dealing with dark-electronic music. What has been their impact on you as an artist and the Mexican scene generally speaking?

Markko: Yeah Hocico has an important status in the world-wide dark-electronic scene and thanks to them people are keeping an eye on the Mexican bands. That’s why I really admire them and I consider myself a Hocico-fan.

As a musician they represent everything that any band wants to achieve. Since the first time I saw them live I knew that I wanted to compose music myself.

Q: What do you keep in mind from more than 10 years of involvement in C-Lekktor and what brings the future?

Markko: I think it’s my conviction about keep creating something that can be considered as ‘art’. I have nothing to prove to anyone else because I’m not looking for fame, but for me the most important item is a constant evolution of the creation process. I’m always trying to improve all different aspects so future is quite clear to me… ‘I SEE THE MUSIC’.

Q: Circuito Cerrado recently released its second album “Arrhythmia”. What can you say about the composition of this new work and do you see an evolution compared to the “Distortment”-debut album?

Markko: Definitely yes, there’s an evolution; this time I tried to follow a line about the composition of the songs, but at the same time I kept some elements from the “Distortment”-album. I think I’m reaching the sound that I’d in mind, but my curiosity on this project is not finished and I think on the next release you will find different elements that I have to experiment with…

Q: Kromak definitely is your most surprising project for being totally different in sound and influences. Tell us a bit more about this project and what’s your perception on ‘techno’-music?

Markko: As I told you, I’m an old-school person so techno-music had an important impact on me. I’ve been influenced by trance-music, which proves I’m not a closed-minded person who just listen to the same music or bands or even genre all the time. I love a lot of electronic music styles, HARD AND SOFT and trance music has a different feeling filling my melancholic and energetic side. For me  Kromak is music without limits…

Q: You’re involved in different bands so is there a kind of hierarchy, one band being more important than another one?

Q: Your work has been released on different labels like COP International, Infacted Recordings, SkyQode, Digital World Audio and now Alfa Matrix. What’s your experience with labels generally speaking and what do you expect as an artist from a label?

Markko: Gratitude is what I have for all of them. They believed in me, so that’s why I’m trying to do my best and that’s the least I can do. It all feels like a mutual hard work and without them nothing could be possible. I respect them all!