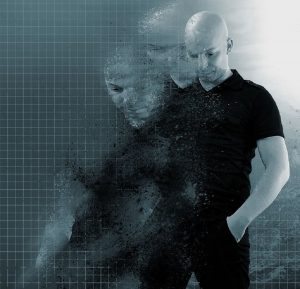 LLUMEN is the newest Belgian formation that joined the Alfa Matrix stable. It all started as a real band featuring several members, but throughout the years Pieter Coussement remained the single member on board. His debut album “The Memory Institute” took me by surprise for its complexity in sound writing, maturity in the global production process and efficiency when it comes to club-friendly music. It’s hard to define the style LLUMEN is dealing with, but you for sure will recognize elements of EBM, future-pop, IDM. According to me LLUMEN is one of the hottest newcomers from the moment so I wanted to know a bit more about this project.

Q: How did you get contaminated by the electronic-music virus and tell us a bit more about the set up of Llumen?

Pieter: I guess it must be somewhere around 1985. Back then my older brother was a DJ playing a lot of punk and new-wave. A lot of Cure, Sisters Of Mercy, The Smiths and so on. I remember hearing Fad Gadget’s “Back To Nature” on one of those parties and I was instantly hooked. While my high school friends were really into Pink Floyd, Tangerine Dream, Deep Purple, the Rolling Stones and so one, I was the oddball out and spent every waking hour getting infected by electronic music.

I played in a few rock bands in my teens and even then I explored the possibilities of electronic instruments. Finally one of those bands grew out to be my first electronic project. Life caught up to it, as the other members had found new priorities. I however kept involved with electronic music and sound art throughout my studies and early professional career.  In the end, LLUMEN became the more mainstream outlet of what I was doing, since everything else was (and is) very experimental, even though I can’t seem to stop experimenting even when making music for LLUMEN.

Q: “The Memory Institute” is your official debut album, so what does it mean to you and what is the album all about?

Pieter: Because of my previous job “The Memory Institute” has become the result of a very lengthy process, even if I hoped to get everything finished way sooner. In that respect, I think every debut album is a reflection of a search for a certain (musical) identity, and all songs represent part of that search. The release is a moment in time where I can reflect upon the path that I took and look forward to where it can lead.

“The Memory Institute” touches a variety of themes or better points of view but all are orbiting a central theme. While many would agree that my music is rather dark, the songs are almost always love songs. The different points of view towards love, for me, blur the autobiographic or fictional aspects of what I’m writing about.

Q: I think there clearly is a link between your daily job and the music you’re composing. What is it all about?

Pieter: Today I work at the faculty of Architecture in Ghent. You probably refer to my job at IPEM. I finished my PhD research at The Institute of Psychoacoustics and Electronic Music some years ago. Early on in the inception of LLUMEN, when I was still working for IPEM, I was constantly surrounded by technology you can normally only dream about and way better musicians than me. Two of them became very good friends and keep on pushing me in bettering the music I make.

My PhD was about interactivity and music and I’ve been making a lot of Interactive and Responsive sound installations, experimenting with generative music, virtual reality elaborate surround systems, sensors and 3D tracking systems. I even wrote a synthesizer for deaf people at one point. Having the luxury to experiment daily with what you love is great, but it does slow other things down a bit too.  I hold my time at IPEM very dear and the experimental part of it can still be found in the way I work on LLUMEN songs and how to visually represent my music.

Q: It’s clear that you really share a passion for ‘sounds’ this way creating a kind of very own sound-DNA. How do you work on the compositions and do you have some referential artists?

Pieter: Thank you for this, I regard this as a big compliment! I’m massively interested in creating sound pallet with which I can paint my musical ideas and obviously spend too much time on it.  When I go clubbing, I often find myself standing still on the dance floor mid song trying to figure out how a certain sound has been made or incorporated in a song. Artists that trigger me in that aspect can always count on my respect, even when their music doesn’t always find a one-to-one translation in my music. Apart from the obvious like Klinik, Suicide Commando, F242, Covenant and basically everything Daniel Meyer does, there are many things that very much influence me. A lot of martial music like The Protagonist or In Slaughter Natives, but also bands like Ordo Equilibrio or Rome. Completely out of the scope of EBM or industrial I find a lot of the Raster Noton  projects sonically and visually very intriguing. People should really check out Kangding Ray, Emptyset, Atom TM and Ryoji Ikeda for 21st century way out there electronic music.

Q: You just mentioned Daniel Meyer (Haujobb) and I’ve to say your album makes me think to a kind of sonic hybrid between Haujobb and Covenant! I would say not that bad, but what are the elements in their sound you recognize in Llumen?

Pieter: As said, I have a profound respect for what Daniel Meyer does, even if it took me until the release of Haujobb’s “Ninetynine” to become a complete fanboy. With Covenant it is probably the other way around, “Dreams Of A Cryotank” and “Sequencer” instantly became two of my favorite albums. Because of this, I can’t argue with calling LLUMEN a hybrid between two of my all-time favorite bands, even if I never intended it. I do recognize some of their elements in my music, like their attention to detail, but I strive to make LLUMEN very much my own.

Q: The live performances reveal an important visual aspect, which in a way is another aspect of your work. What do you try to express on stage?

Pieter: I think there is a lot you can do on stage with visuals and light. I’m a big fan of the audiovisual performances that seem all the rage these days and I am a firm advocate of the synergy this can create. In a side-project we work with audiovisual synths, where the visuals generate the sound and visa versa. We are currently working on some new stuff to tell the LLUMEN story better that incorporates ideas from the audiovisual world even more. As such, we work with a lot of responsive visuals, stuff that we program from scratch and we always try to find new ways of controlling those visuals. We are however a bit dependent from the venues where we play, but plan to expand the visual show with DMX controlled lights so we can get some extra atmosphere that does not rely on the quality of the venues projection capabilities. I believe that working this way, rather then having someone faking on a keyboard can work way better. This is why you always see my brother completely stressed out on stage.

Since you’re here … … we have a small favour to ask. More people are reading Side-Line Magazine than ever but advertising revenues across the media are falling fast. And unlike many news organisations, we haven’t put up a paywall – we want to keep our journalism as open as we can. So you can see why we need to ask for your help. Side-Line’s independent journalism takes a lot of time, money and hard work to produce. But we do it because we want to push the artists we like and who are equally fighting to survive. If everyone who reads our reporting, who likes it, helps fund it, our future would be much more secure. For as little as 5 US$, you can support Side-Line Magazine – and it only takes a minute. Thank you. The donations are safely powered by Paypal.
Tags: Covenant, EBM, Haujobb, Klinik, llumen, Smiths