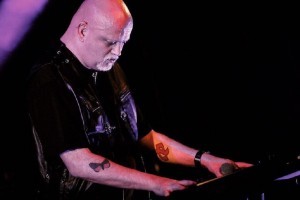 Leæther Strip belongs to the collective memory of all EBM fans. After nearly 30 years of existence, multiple hits and referential albums this Danish band set up an driven by Claus Larsen hits already back with a new album entitled “Spæctator”. The new work has been released on Rustblade and appears to be one of the best productions from late Leæther Strip work.

Q: After years of commitment and an impressive discography what does the new work “Spæctator” means to you?

Claus: Yeah 2018 will make it 30 years since my first release as Leæther Strip. Releasing a new album has, since my first album, always been a personal landmark for me. I am very blessed to have been able to do this for so long and still have listeners. There is not a day that I don’t feel grateful.

Q: I got the feeling “Spæctator” is a real intimate album because of some recent tragic events you went through. What is it really all about and does music has this kind of magic power to heal wounds?

Claus: Yes, I lost my mother 2 years ago. Some very serious and suppressed events, and thoughts mainly from my childhood and teens, needed to be dealt with. Stuff that I should have handled many years ago, or events where people didn’t believe me. But I guess we all push stuff like that in the background because some things are just too painful. Most of my songs are very personal and kind of a diary of my life and what was going on around me, near and far. Composing songs has been my way of dealing with life events and also an escape from myself and my dark clouds. The best weapon for me against the dark clouds is being creative.

Q: One of my favorite cuts “Luc Van Acker” sounds less intimate, but what’s the story behind this song?

Claus: That song is the album’s ‘fun’ song. Back in ‘91 Leæther Strip opened up for the Revolting Cocks, and all I can say is that is sure wasn’t boring backstage. I cherish that gig so much and it’s one that stands out as one of the most fun gigs I played. I don’t think I’ve ever seen a band having so much fun both backstage and on stage. They were all super nice to us. I got kind permission from Luc and Chris to use that iconic ‘Luuuc Vaaaan Ackerrrrr’ shout from the Cocks’ love album in the song. I will be adding the song to my live set soon so I bet that will be fun.

Q: I already mentioned your impressive discography, but do you see one or more releases, which have been more important than others?

Claus:  For me they are all very special of course, and sure there are some more successful than others, and yes I do know that album like “Solitary Confinement”, “Self Inflicted” and “Legacy Of Hate And Lust” stand out in many of my listeners minds. These albums are still opening doors for me. I learn a lot doing each new song, so for me the old albums have their own life bringing back memories of good or bad times in people’s minds. I know that, because people write to me about what certain songs mean to them personally. I love getting these messages.  It’s what it’s all about. The power of music is so very strong, and it’s my therapy too.

Q: During the past few years you’ve released an impressive number of (mainly digital) cover songs from 80s formations like Simple Minds, Front 242, Skinny Puppy, Talk Talk, Yazoo, Depeche Mode ao. What do these covers mean to you and what do you precisely try to inject in a cover version?

Claus: Doing cover version of my favorite songs is kind of my hobby, and also a way to train my skills as a musician. I’ve done it for many years. I am a self taught musician and I do it all by ear, so diving into someone else’s song is good training and very inspiring. I mostly only cover songs that has had a special meaning for me and I am not trying to make the original better, as some think, I do it all with love and respect and I hope it might spark some new life into the songs and maybe make some new listeners check the original band out, in case they haven’t discovered them yet.

My cover album “Æppreciation”, which I released on Emmo.biz Records and on my Bandcamp site a few years ago is one of my most successful albums to date. Love doing them, so that won’t stop.

Q: I also noticed several songs composed for your husband Kurt. How is he doing and what’s the importance of your beloved –especially in your artistic activities?

Claus: Yes, his medicine costs are sky high and we’re struggling to make it work financially, so instead of doing a ‘go fund me’ or something like that to help him. I wrote some songs so people could support him, and us that way. All income from Bandcamp sales goes directly to his medicine account. People have been so very kind and many have been very supportive. We are still waiting for a kidney transplant, from me to him, but the doctors still do not want to do it. This sadly also means that Kurt can’t perform with me outside the EU, because he can’t get travel health insurance. It’s very hard for us, but it would be too risky to travel without insurance sadly.

It’s hard for us both being apart in this situation, but I need to make a living supporting us both. Right now he is stable, but that can change very fast, but we live one day at a time, with our heads held high. We got a live full of love and people who care about us all over the world. As long as we get each other and our friends support, nothing can beat us.

Q: What are the further plans for some of your side-projects like Am Tierpark, Klutæ and the (digital) label Body Music Records.?

Claus: I’ll soon starting to work on a new Klutæ album. It’s going to be a ‘back to the roots’-album, heavy and aggressive. That’s the plan.

With Am Tierpark, John and I just released a new EP titled “Cherry Blossom” on limited edition vinyl and digital. The next Am Tierpark is also composed and ready, so we are hoping it will be out soon too. We also hope to get some concert jobs with Am Tierpark during new year. We have had so much positive response so it’s time we take it to the stage.

With Body Music Records we have lots of exciting releases out and more to come in the next months.

As for Leæther Strip, the songs for the next album has also been composed and the tour will soon continue with shows in Madrid, Poland, Mexico, Germany, USA and many more booked. And in planning. So 2017 is going to be a busy year too. 2016 has been the best concert year for Leæther Strip ever, playing all over the world has been yet another dream come true. Thanks to my supporters I am still living my teenage dream still after almost 30 years.

Since you’re here … … we have a small favour to ask. More people are reading Side-Line Magazine than ever but advertising revenues across the media are falling fast. And unlike many news organisations, we haven’t put up a paywall – we want to keep our journalism as open as we can. So you can see why we need to ask for your help. Side-Line’s independent journalism takes a lot of time, money and hard work to produce. But we do it because we want to push the artists we like and who are equally fighting to survive. If everyone who reads our reporting, who likes it, helps fund it, our future would be much more secure. For as little as 5 US$, you can support Side-Line Magazine – and it only takes a minute. Thank you. The donations are safely powered by Paypal.
Tags: EBM, Leaether Strip, Yazoo