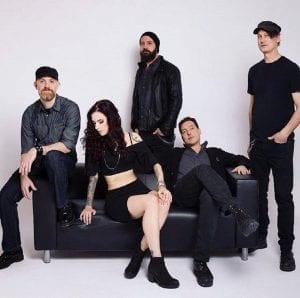 Hailing from Chicago (USA) and set up in 2003 I:Scintilla progressively became a successful band. Driven by core members Jim Cookas (programming guitar) and Brittany Bindrim (lyrics & vocals) they got signed to the Belgian label Alfa Matrix and never stopped increasing their popularity album after album. I:Scintilla took their time to achieve their newest full length entitled “Swayed”, which is their first album since 2010. I’d an interesting chat with Brittany Bindrim.

Q: “Swayed” is your first new album in 8 years. It seems you needed a break to recharge your creativity while the political climate in your country has been a source of inspiration to work on new material. Can you give us more details about it all?

Brittany: We did feel the need for a break from I:Scintilla towards the end of 2013, but we never stopped writing. As new musical ideas started flowing out, we strongly considered the idea of starting a new band. It wasn’t until 2017 that we decided to release the songs as I:Scintilla. We’re thankful we went through that bit of uncertainty, since we’re very happy with the record and where the band at is today. Even though the songs on “Swayed” were written before Trump was a presidential candidate, there were signs that a troubling political regime was growing.

As many writers agree, I think there is possibly some sort of sixth sense that comes into play while crafting lyrics that allows you to pull things from the collective unconsciousness, because you put yourself in an open and vulnerable state while writing songs. The lyrics on “Swayed” were inspired not only by the political climate, but by meditations on life experiences, as well as both the beautiful and cruel aspects of human nature.

Q: This interview comes right after the latest elections in the USA. How do you feel –as American citizens and as artists, affected by the results and global situation?

Brittany: We are opposed to the current administration and the actions they have taken within our country as well as their global policies; especially when it comes to the environment and immigration. The Trump administration has fed an unprecedented amount of disinformation to their supporters, and by doing so infuriating the opposition and further dividing the U.S.. It feels like Americans in opposition of the current administration have become desensitized to the amount of lies that are being fed to the country. Although the midterm elections in our country were a positive step in the right direction, we feel a bit powerless to ward off further damage this president is capable of.

As artists and musicians, I think we can make a small difference. Engaging with music that explores a political idea in an abstract sense, can further connect the listener to their senses -it can make that idea felt and inspire critical thinking or engagement. It can help ward off the numbing effect we’re experiencing in this political climate.

Q: Over now to “Swayed”, which sounds to me as your most eclectic work so far. I even get the impression you in a way reinvented the I:Scintilla sound. Tell us a bit more about the writing and the input of the new band members?

Brittany: We most certainly have matured and evolved as a band. “Swayed” is a direct reflection of that change. On the album you’ll hear more organic instrumentation and fuzzy guitars versus the more programmed sound of our past. But you’ll still find intricate synth work and catchy melodies found in our previous material. Our sounds has naturally evolved since 2004. We’ve always trusted our instincts -for better or for worse, and followed the muses. We have never been a band that has used the same formula as a template for an album. We like to explore new creative methods and experiment with our sound. We are aware that this can sometimes upset some fans that have been us from the beginning who prefer our previous material, but many listeners appreciate the evolution. You are never going to please everyone, so you might as well be true to your craft and write music that you authentically want to create, right?

Q: Next to a noticeable evolution in sound, I also noticed a serious improvement in the global sound production. You clearly didn’t spare any effort to get a very professional production. What was your original goal when starting the writing of “Swayed”?

Brittany: We began working on the album in February 2014 and then spent the next three years writing a ton of material. We whittled the group of songs down to 13 and recorded them at Shirk Studios in Chicago in early 2017. We then spent almost a year on overdubbing and mixing, which is quite a bit longer than what we’ve done in the past. Our super talented new producer, Greg Panciera, is also hugely responsible for the update in our sound and production.

Q: Since you official debut album I:Scintilla became an instant success. What’s the impact of becoming a successful band on the person(s) hiding behind the artist(s) and how do you explain this success?

Brittany: We are grateful and feel incredibly lucky to have found the audience we have, but we’re also aware that our successes are small when compared to many artists. You can never predict how your music is going to be received; it’s always a mystery to artists behind the music. In hindsight, I think the small success we had with “Optics” was due to a combination of a few factors: a raw, naive charm and a boldness often found in a band’s early work, in addition to releasing it at the right place and the right time. Moving forward, we hope that we can continue to connect with fans established and new.

Q: Live performances and tours have been always very important for artists. How do you see yourself as live band? What’s the input of the new members on stage and what might we expect about upcoming shows/tours?

Brittany: We approach our live performances as being just as important as our recorded music. All of us really enjoy performing and have a blast together on stage. Outside of Jim and myself, our drummer Vince Grech is playing more powerfully than he ever has before and our solid, funky new bass player Dean Dunakin is the rock in our band. Last but not least, we recently brought on a new guitarist, Myles Arwine, and he is taking the guitar work to a whole new level with his melodic and emotion performances. We really hope to do more extensive touring in the near future and will be actively seeking to team up with tour mates next year.