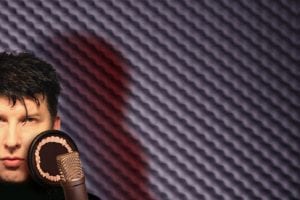 Kimmo Karjalainen got some recognition as member of [Active] Media Disease and Neuroactive. In 2007 he set up Huminoida and started to release his own music, which reveals an atypical synth-pop approach. Earlier this year he released the album “The Grey Area” revealing a quite eclectic electro-pop release carried by a strong lyrical content.

Q: Kimmo, you gained some experience in music as member of [Active] Media Disease and Neuroactive. What did you learn and keep in mind from this experience with both bands and what incited you to set up Huminoida?

Kimmo: I have fond memories of both of those bands and I learned something about the recording  process and gigging also, but after all these years I think the camaraderie between band members is the thing that I value the most. There are some good points of making music together, and the times when everything clicks into place are just wonderful. But Neuroactive slowed down (we both had very time consuming jobs at that time), and I had always wanted to write and release my own stuff, so I eventually set up Huminoida.

Q: Huminoida was originally set up in 2007 as a duo. What have been the main facts in the band’s history and how does it feel to move on as a solo-project?

Kimmo: Yes, I was determined to set up this slightly skewed synth band (first single was an instrumental and the  B-side was carved by hand!), and AugM had his own record label (Plastic Passion) and some connections, so he joined in.

After a while it became clear that he really hadn’t time to contribute, so he left after two singles and I started to make the first full-length album which was released 2011. After that there were two EP’s and the second album “The Grey Area”, released in 2018. This kind of solo working suits me well, I love the  freedom of it.

Q: All Huminoida productions have been released on Out Of Range Records, which I think is your very own label. So in the end it all looks like you’re taking care of every single aspect of the production; from composition to recording to production to manufacturing… What does this D.I.Y. approach mean to you and why is it important?

Kimmo: Well, maybe I’m just a control freak… 😉 I love the D.I.Y. aspect because it’s direct, fast and fun. Straight from the artist to the audience, there are no  middlemen filtering out the odd bits and telling what can or cannot be released. I’ve always loved records  where the artist’s personality shows through, and this is the way to do it. It’s also very fast and easy to  upload a new track to the net whenever you want.

The visual aspect is also an important part of the Huminoida releases. I like to make an effort to offer something extra with the music: paintings for the record sleeves, booklets, posters, little bits & pieces to make the whole package interesting. That’s the fun part, and I’m intrigued with the idea that the whole release is made by an artist including the artwork. (‘Gesamtkunstwerk’, like they used to say)

Q: What have been the main ideas you wanted to accomplish when starting the writing of the new album “The Grey Area”?

Kimmo: Musically “The Grey Area” is in the line of the other Huminoida releases. It’s varied, and I think a strong collection  of songs with nice pop tunes (“Just By Wishing”, “Beneath The Empty Skies”), harsher material (“Contradictator”, “Trying Times”, “Thoughts Like Insects”), plus the ‘difficult’ bits and some beautiful tracks also.

Lyrically it’s a whole different thing, it became clear very soon that this isn’t going to be a party record. I started the songwriting in 2015, and since then the news from the world and from my home country Finland haven’t been pleasant reading with all the hate-mongering, terrorism, wars, influx of refugees, racism, the relentless greed and short-sightedness of the business world and politicians. Not to mention the end of the world… It’s finally seeped into the common consciousness that this isn’t going to end well, and the problems  are so big that we can’t deal with them, or more likely don’t want to deal with them.

I wanted the lyrics reflect the anxiety of the the times, and I’m also venting my frustration and anger in these  lyrics. But I definitely wanted to avoid preaching or the ‘Fuck you fucking cunts’-type of argumentation,  because there’s enough moronic shouting on the Internet already. I think I managed to handle the difficult  topics well, and I’m happy with this set of lyrics, although they’re pretty heavy, depressive even.

Q: One of Huminoida’s main characteristics is the ‘atypical’ electro-pop approach. It’s hard to describe, but your music clearly is an antidote to all electro-pop clones and Depeche Mode copyists! Tell us a bit more about this ‘sound’ and ‘approach’?

Kimmo: Oh yes, I’ve had difficulties with this also…  I sometimes call it ‘uncomfortable synthpop’:)

The style of Huminoida is hard to describe mainly because it’s musically varied, there are some nice  synth-pop tunes, some beautiful tracks and then some dark, heavy stuff as well. To me it’s electronic music  mainly to listen to, there are the danceable tracks, but it’s not club-friendly at all. Lyrics are also an important part of Huminoida. This may sound odd, but I see myself more as a singer-songwriter than an electronic music  maker anyway.

When it comes to sounds I don’t have any rules. I’m a music lover and I’ve taken lot of influences from lot of  different genres, but naturally I try to maintain some degree of originality in the work. There has to be that ‘personal touch’, otherwise the whole thing pointless. (I don’t quite understand bands who want to copy  some other band exactly – there’s a tragic lack of ambition there.) So, I’m not so keen on following some current song writing style or ‘trend’ or imitate certain era in music. But I love those late 70’s / early  80’s synth sounds, and that’s why some Huminoida tracks have a very strong ‘retro’ feel.

Q: There’s a hiatus of 7 years between both Huminoida albums. How would you analyze your own evolution as musician from the “Whiter Album” towards “The Grey Area” and what brings the future?

Kimmo: Well, actually I don’t call myself a musician, because I’m not exactly a virtuoso.. I guess the new one is more refined soundwise, and the production/mixing is clearer (not too crisp or light though – I like my  synth-pop dark and heavy).

The future brings new records, next will be the “Autumn” and “Winter”-EP’s to complete the “Seasons” series. I’ve also thought of adding some other instruments along the synths to some tracks, trying some new tricks etc..  Lately I’ve had this growing urge to make some really insane, out-there release (in the same vein as the first hand-made single), but these are now just in my head, let’s see what comes out.

Since you’re here … … we have a small favour to ask. More people are reading Side-Line Magazine than ever but advertising revenues across the media are falling fast. And unlike many news organisations, we haven’t put up a paywall – we want to keep our journalism as open as we can. So you can see why we need to ask for your help. Side-Line’s independent journalism takes a lot of time, money and hard work to produce. But we do it because we want to push the artists we like and who are equally fighting to survive. If everyone who reads our reporting, who likes it, helps fund it, our future would be much more secure. For as little as 5 US$, you can support Side-Line Magazine – and it only takes a minute. Thank you. The donations are safely powered by Paypal.
Tags: Huminoida, racism, synth-pop, terrorism