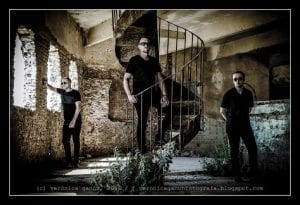 Set up in 2005, Hidden Souls is an Argentinean band based in Buenos Aires. They got featured on a few compilations like “Electropop 12” released on Conzoom and did a few noticeable remixes for electro-pop formations Parralox and Zoon Politicon. They signed a record deal with Echozone and this year unleashed their debut album “The Incorruptible Dream”, which is a real nice surprise appealing for lovers of electro-pop, future-pop and EBM. I’d a chat with one of the members, Guillermo Pardo Neira.

Q: Can you briefly introduce your band and the way you got in touch with electronic music?

Guillermo: We are an Argentinian band, a trio based in Buenos Aires. We combine elements of synth-pop, future-pop, EBM and dark music.

When we were kids we grew up listening to 80’s music and most of those songs inspired us to compose music with synthesizer. In that time we were listening to the radio discovering bands like OMD, Depeche Mode, Pet Shop Boys, Camouflage… It was the way we got interested into electronic music.

Q: I can imagine it’s not an easy thing for an Argentinean electro-underground band to catch the attention of the European- and American scene where most of the bands in the genre are coming from. What’s your perception about this point and what can you tell us about the ‘scene’ in your country?

Guillermo: That’s right! It’s so difficult… We have a lot of economic problems in our country and that’s the reason why the ‘scene’ in Argentina remains too small. We must pay double the price for the equipment than in Europe or U.S… and we must work double time to earn that amount of money. For example, if an European band needs one year to buy all the ‘machines’, in our country we need four years! So it’s so hard to start a band… you can have the talent, but without money the world doesn’t turn.

Q: So I can imagine your debut album being signed on Echozone means a lot to you!? How did this deal happened, what do you expect and what have been the first reactions on the album?

Guillermo: Yes, for sure! We are so happy… We are proud to be part of the Echozone family. A lot of bands we like are signed on Echozone. Sincerely, it’s our debut album and we didn’t expect that various records labels around the world would be interested in our music. It was a wonderful and nice surprise! We met Sven Schaak (manager of In Good Faith) who listened to the album and he introduced me to Ulf Müller (Project Ich) from Echozone.

Most of the reviews are positive and we are so glad about the reactions. There’s a positive feeling around us… The ‘charts’ and the sales go well. The album is selling very well and especially for a debut album debut coming from a band that never played in Europe and based in a country, which is 12.000 kilometers away from its record label.

Q: What kind of album did you want to accomplish with “The Incorruptible Dream” all about (sound- and lyrical wise)?

Guillermo: We tried to mix our taste of music, blending different genres of music. Starting from the base that we don’t like the music ‘labels’ that are so often used to classify the bands. So, on “The Incorruptible Dream” you can find elements of synth-pop, future-pop, EBM, but always recovered with a dark atmosphere because of the lyrics… But you can notice folk guitars (cf. “Know”) or long instrumental intros (“Political Brainwash Machine”). A few songs don’t have the typical structure you would expect for a ‘synth-band’.

Q: I’ve been impressed by the production of the album, which has been done by Fernando Sande Dallas. Tell us a bit more about him and what have been his impact on the sound?

Guillermo: He has a lot of experience in music, so I learnt a lot from him. He has an electro band called Nekrodamus and a dark-folk project called Hyperborei. He also composes soundtracks.

When I finish a ‘Demo’ I send it to Fernando who gives me his point of view about the song and we next make the final arrangements together. We are long-time friends loving the same music and we know each other very well, but the most important thing is that he understands me, he ‘understands my work’… He knows how my brain works! (Hehehe!)

Q: You made a clip of the song “The World Is Falling…”, which is meant as an anti-war song and have just finished another clip of the song “Hearts And Minds”.  What did you try to express/reflect and what do you expect from a clip?

Guillermo: We love movies! Just as music, a movie can be used as a distraction from the outside world, but a movie can be a ‘wake-up call’ to our society either. For us, filming a video is more than a ‘commercial thing’. We tried to show something more… make ‘a short film’ to help to bring a certain message, as we did in “The World Is Falling”. Lyrics, music & video works perfectly together. But sometimes when the lyrics are more intimate, it’s hard to express yourself in just a few minutes. Also, it’s a little awkward too because we don’t enjoy to be in front of a camera.

In our second clip, “Hearts & Minds”, we made a (funny) ‘tribute’ to David Lynch’s “Twin Peaks”. One of the filmmakers who cater to our fears, desires or maybe necessities.