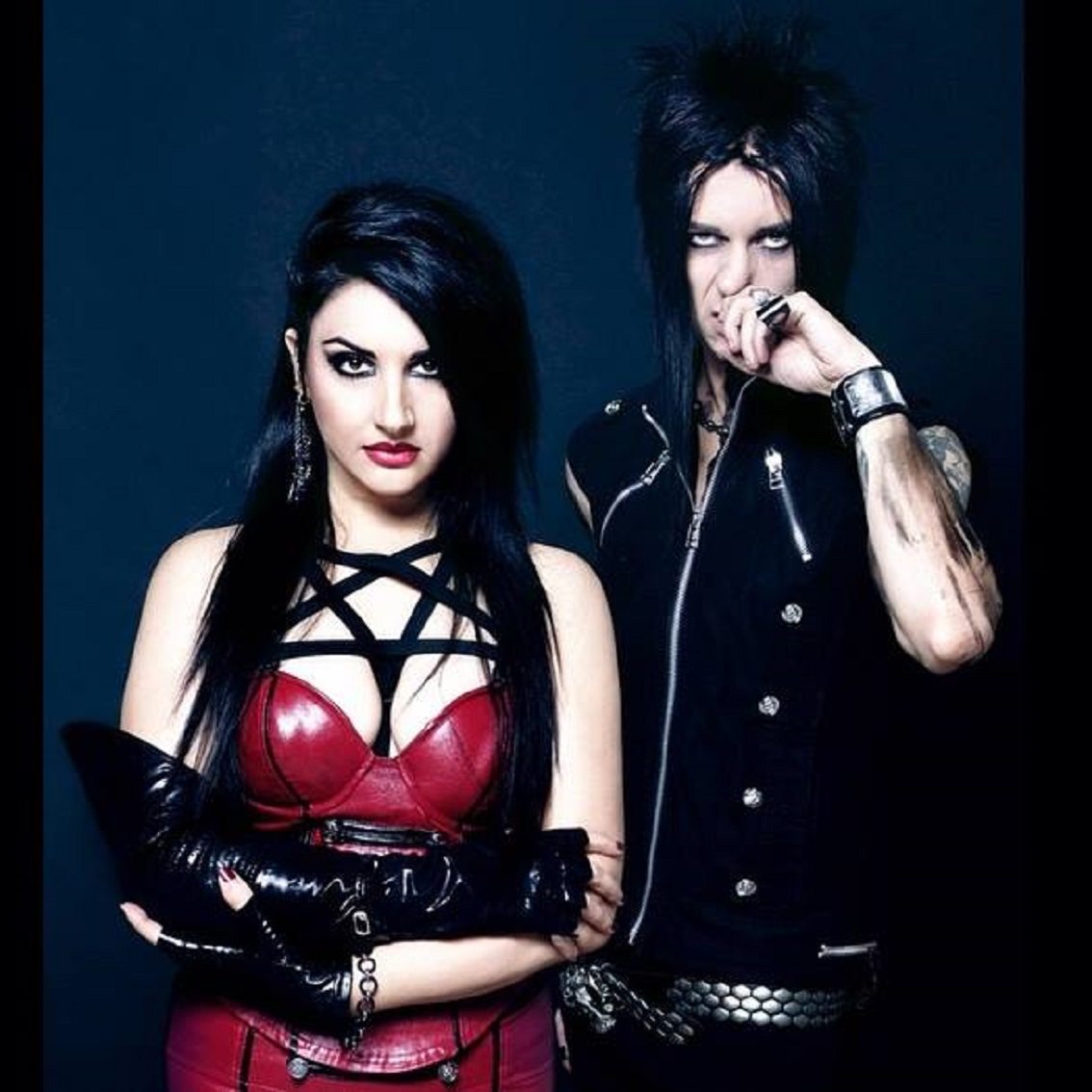 Helalyn Flowers is lead by the powerful vocals of Nøemi Aurora and the artistic input of studio guru MaXX. The duo released this year their fourth full length album revealing a furious production featuring heavy electronics and menacing, metal-minded guitar riffs. Helalyn Flowers is mixing multiple influences, but always with power and sonic violence. I got in touch with the male pole of the band to get more info about “Sonic Foundation”, which has been released on Alfa Matrix.

Q: What is your new album “Sonic Foundation” all about and how do you see the evolution in sound from your previous albums towards the new work?

Max: “Sonic Foundation” is Helalyn Flowers as it’s meant to be. It’s a burst of dichotomies, opposites, wildness and passion. When Noemi and I founded Helalyn Flowers we had an album like this in our minds, so I suppose that past three albums represented the necessary way to it. In the past, we intentionally redefined our sound, trying new ways and taking our risks, like the “Stitches Of Eden” album back in 2009, living a sort of uneasiness that sure has darkened our music gradually. We feel to be thankful to all that angst and rage of which “Sonic Foundation” is the proud son. We cling to ourselves exclusively, we have Helalyn Flowers on our minds all the time, we are our own bigger source of inspiration.

Q: I get the impression that you never stop to increase the power of electronics and guitar play, reaching a hard and merciless production, but still a real harmony between sound and vocals? Tell us a bit more about your sound properly speaking and the global production?

Max: I always believed that melody is very important for music in general. It’s able to raise whatever mood you need and makes you sing and drag you to a song. Doesn’t matter how aggressive the music is. In our case, I think that it’s a reflection of what we love to be and act.

The sound production is based upon our approach to the wall of sound. We overlay everything. We oppose the modern way of producing electro-metal and industrial in general. When I listen to many records to me it’s more like a computer screen sliding MIDI tracks than enjoying songs. It’s all clean, dry, so… responsible and ‘correct’. Well, Helalyn Flowers are irresponsible and incorrect, dirty and wet. “Sonic Foundation” has the feeling of an old classic.

When you say ‘hard and merciless’ it’s exactly what there’s in our minds when doing a song. We love big sounds, big ambiences, we feel like a BIG band and everyone must join it. It’s the Ancient Roman way. Not by chance.

Q: I noticed an interesting quote at your site telling that ‘”Sonic Foundation” is an album that uncoils through dangerous and surrealistic figurative worlds, invoking post-primitive scenarios à-la William Burroughs and David Lynch. Can you give us some more details?

Max: The destruction of modern civilization and worshipping the Nature not for what it may seem like might be keys to that quote. We are so bond of the woods we live nearby that when we watch “Twin Peaks”, for example, not only we can recognize how it feels like but also we can understand the most dangerous and terrifying needs within the human nature.

Q: The song “Beware Of Light” previously released as EP-title song and featuring Chris Pohl (Blutengel) is a real master hit. How did you get in touch with Chris Pohl and how did the recording and production of the song happened?

Max: When we were collecting bonus stuff for the album we felt like something big, something going beyond the ‘usual’ remix was missing. Immediately, we thought at Chris Pohl of Blutengel as the one really able to let it happen. So, we asked him and he accepted enthusiastically. It was clear that he had to put his vocals into this version because one of the main reasons why we contacted him is just the huge vocal dimension of Blutengel (besides the ‘bigness’ of the meeting itself!). He re-sampled the song to add his own Blutengel vibe too. He didn’t give himself airs. He is a very passionate guy. Nowadays, younger people in the scene have much more schemed minds and do these kind of things just for money without considering if they actually love what they do.

Q: Do you already have new ideas and inspiration in mind regarding further releases?

Max: We will start to record the new album next September. Our ideas are so clear about it. Sure we won’t replicate the same album. That doesn’t belong to us. Also, we love to think that “Sonic Foundation” is the ultimate summa of our first decade as well as of the direction we took after our first self-released Mini-CD (“Disconnection”) in 2005. We don’t think that there are parts of “Sonic Foundation” that need to be improved. It’s perfect in its entirety. Contrary, we didn’t feel this way in the past years: when we were about to deliver a new album we felt like we might have done better or that it was not ALL that we wanted to say. So, we catapulted ourselves in massive sessions of studio and song-writing also in reply to that sense of ‘incompleteness’. Now we need to renew our ways, trying different things, because ageing doesn’t suit us. Our blood must remain young forever. Replicants are the meanest suicidal.

Q: Helalyn Flowers stands for a heavy sound, but still a noticeable and explicit image! Where’s the link between sound and image?

Max: The link is within Max and Noemi Aurora, simply as that. The image that you can see in our pictures is the same as the one in our private lives. It’s the way we love to be. We live Rock’n Roll on our flesh.

Many people believe that a noticeable and eye-catching imagery means stupid pop music or brainless esthetic fascists. My opinion is that they are afraid of sex and/or have sexual problems.

Since I was a kid I feel attracted by bands with a great image. That’s what pushes you to listen to their music. It’s like you go in a confectionery: you always want to buy and eat the most beautiful cake!