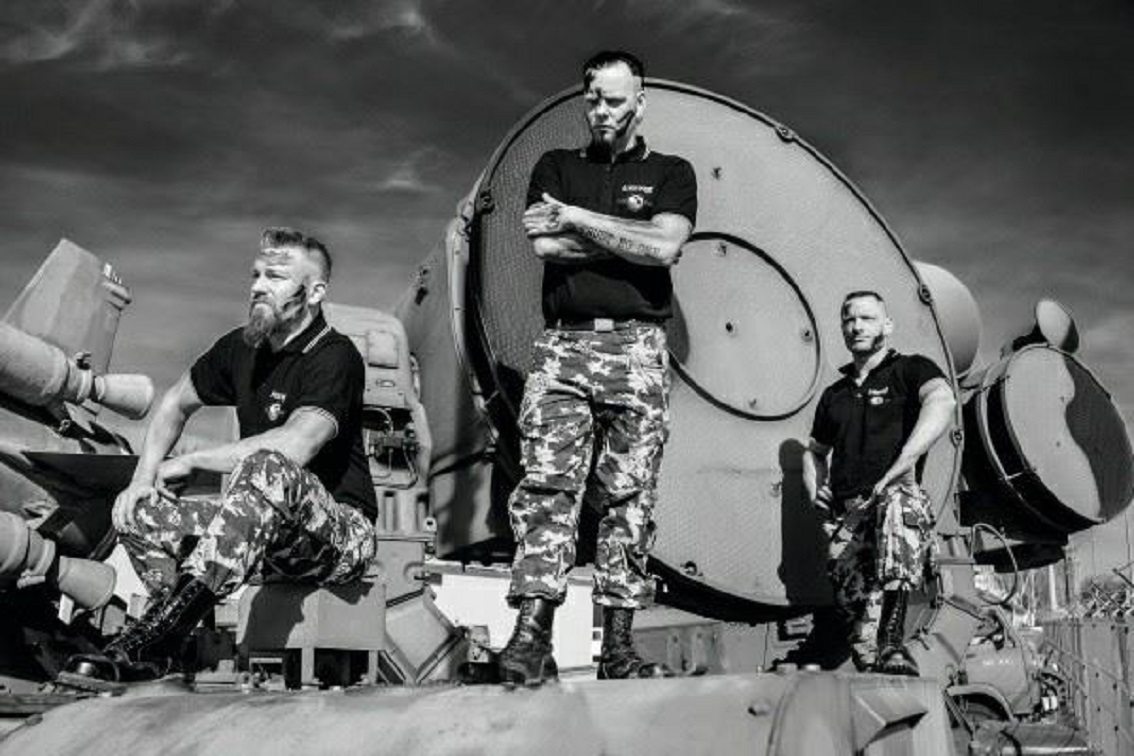 Funker Vogt was set up in 1995 and got instantly successful. Gerrit Thomas (composing) and Jens Kästel (vocals) progressively became one of the leading bands from the dark-electro & EBM scene. They released legendary work on Zoth Ommog, Bloodline, Synthetic Symphony while their previous full length got released on Out Of Line. When Jens Kästel left the band in 2013 the band had to search for a new vocalist. Sacha Korn (‘Sick Man’) joined in creating a real media storm. A new singer and a new label had to be found so Chris L. (Agonoize, The Sexorcits, Dance Or Die) joined in and Repo Records recently released the new album “Code Of Conduct”. I got in touch with Gerrit Thomas and Chris L. but started the interview with a question for label owners Kai Schmidt and Björn Böttcher (who both got involved with Funker Vogt as well) to know what they think about it all.

You can order the band’s newest album right here.

Q: You (Repo Records) guys are quite familiar and pretty close to Funker Vogt so how did you perceive all what happened around the band during the past few years and what does it mean to you and Repo Records to have released this new album?

Repo Records: After our split in 2010, we have all kept a distance from each other. So we have certainly read about all this, but at that time it didn’t affect us that much. We all decided to go separate ways in 2010, without knowing if we ever will get together or not. And at that time, we managed this ‘divorce’ as harmonic as such a thing can happen.

As we have been personally involved in the old releases, we wanted to make them available again. So we approached Gerrit with this idea. After some negotiations we found an agreement.

Last year Gerrit told us that he wanted to restart Funker Vogt and if we were interested to release also new material. After so much time has passed, we thought that the time was right, to work together again. And it works very well so far.

For us this release really matters as Funker Vogt was a big part of our past. And from the label side it’s nice to have them on board for the very first time with a brand new release.

Q: Gerrit, after the departure of Jens Kästel, there was a lot of commotion around the new singer Sacha Korn who got rapidly replaced by Chris L. I can imagine it must have been a relief to release this new album “Code Of Conduct”?

Gerrit: We worked on some songs for about three years until they were sung by Chris and finally got released. It was a very hard time before Chris joined the band. So, the release of “Code Of Conduct” was a kind of start into a new era for us. And now, we’re so happy about all the good reactions.

Q: I can easily imagine all the commotion that happened must have been one of the darkest chapters in the band’s history. How did it feel for a musician to face all these events and what do you think about it right now?

Gerrit: Everything comes to an end -also hard times and dark chapters. Time heals all wounds! There had been lots of bad things against the band in itself, but also personally against René and me. Many things that were not justified. But I don’t want to rewind this by going into details here. We’re just happy to start again now.

Q: I should say “Code Of Conduct” sounds in the purest tradition of Funker Vogt, but with another singer instead of Jens Kästel. Tell us a bit more about the writing of the album and how did the integration of Chris L. happened?

Gerrit: The writing process remained exactly the same as before. I did the instrumental parts by always knowing where the vocal parts should later be. Then Chris got the instrumentals, wrote some fitting lyrics and sung them. Chris got that Funker Vogt-feeling from the very beginning, so we never had much to discuss or change a lot of his work. It simply fits!

Q: Chris, I can imagine it’s not an easy thing to become the new vocalist of such a famous band. What does it mean to you personally to have joined Funker Vogt and how did the collaboration happened with Gerrit?

Chris: We have been friends for a long time, I didn’t thought about it that much; we just did it, maybe because I never had in mind to replace Jens… I can live very well with the shitstorm…

Q: Funker Vogt has been always much more than simply hard electronic dance stuff, but still a band with a critical perception about society and our world. What about “Code Of Conduct” and tell us a bit more about the song “Brexshit”?

Chris: Every single day is an inspiration; turning on the news and see all the shit that is going on gives more inspiration then I actually need. Europe is falling apart as a community; it’s a good idea but it doesn’t seem to work as long as people are only taking care of their own needs…

Q: What have been the main changes and evolution in the global production process from the very first album “Thanks for Nothing” towards “Code Of Conduct”?

Gerrit: Puh, the whole production has completely changed all over the years. 21 years ago I worked with real synths, drum computers and samplers and recorded all the stuff with DAT tapes. Now, it’s all made with hard drives on computers – from the first note through the vocal recording to the mastering. Therefore everything’s much easier and works faster than twenty years ago.