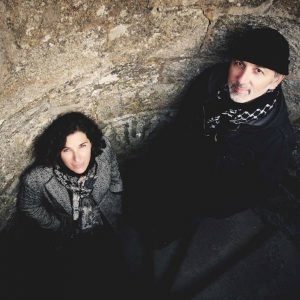 Deleyaman has been set up in 2000 by multi-instrumentalist Aret Madilian (USA) and singer Beatrice Valantin (France) plus Gerard Madilian. The band deals with a dreamy sound universe, which is hard to define, but often linked to Dead Can Dance. Call it ethereal- or dreamy music, but I think it’s not a coincidence if Brendan Perry himself contributed on a few songs of the new and self-released full length “The Lover, The Stars & The Citadel”.

Q: “The Lover, The Stars & The Citadel” is your seventh album to date. That’s a quite magical number, but what does this new opus really means to you?

Aret: It means we still have lots of music to write, it means we love what we do. It still feels as good and exciting as when I started Deleyaman in 2000. We’re just really continuing our musical path quite naturally. We feel our music is expanding and I feel more comfortable exploring new territories with more ease.

I also feel better about my writing abilities and the lyrical content. I have a clearer vision of what the essence of a song or album should be.

Q: What is the new work all about and is there a deeper significance behind the title of the album?

Aret: The work corresponds to our personal evolutions and rapport to the world. We are still evolving within Deleyaman’s poetic work musically speaking, but instead of just finding refuge in it, we feel more concerned and revolted therefore more engaged with our lyrics so to speak. Especially since our album “The Edge” and now with “The Lover, The Stars & The Citadel”.

The ‘lover’ is the protagonist who is singing these songs of love, solitude, reverie and revolt. Juxtaposed feelings. The ‘stars’ symbolize the Cosmos, Infinity, Eternity in which the lover finds himself. The ‘citadel’ is a bit more ambiguous since it could be seen as a place of safety, a refuge. And in a way it is just that. But it also symbolizes our psyche with all its hidden places, its secrets and labyrinths. And most of all, it is a place of resistance.

Q: The lyrics and especially poetry clearly are an important element in your work. What fascinates you in the poetry of Paul Verlaine and Paul Eluard, but especially Pierre de Marbeuf, which is a more surprising name?

Beatrice: Verlaine and Eluard are two poets who have influenced me. I chose the poem of Verlaine because it shines a light on the power and the hostile characteristics of nature. A nature that follows its own pace and obliges a slowness, an immobility. Which is contrary to what our society values in general.

I often need to take my time for contemplation and Winter, which is represented in the poem of Verlaine, is necessary for just that. Eluard’s poem is the perfect song for “The Lover, The Stars & The Citadel”. His writing which is subtle, delicate and reserved is a window through which I escape from some of the pornography and vulgarity of our world.

Marbeuf is incredibly modern considering he is a 17th Century poet. His poem had a place in the album and speaks of what it takes to love and to hang on.

Q: Deleyaman is now active since 2000 so I can imagine there must be a kind of chemistry between the members! Does it feel that way and how did you work and compose the new album?

Aret: The chemistry is intact between Gerard, Beatrice and I, but usually the creation and the composition of an album starts with me putting down my musical ideas, giving them some shape before I ask anyone else to intervene. I create a framework within which Beatrice will bring her ideas and vocal lines. There are some changes since the beginnings. Beatrice for example brought the basis of the songs “L’Amoureuse” and “La Plaine” which I further developed. She also gets involved in giving me her opinions on the ideas as I am moving forward with the album. In the studio, I record all the instruments on our albums with the exception of the duduk which is always played by Gerard. And of course the Greek Bouzouki part in the song Escape is completely Brendan Perry’s contribution and played and recorded by him.

Q: How did you convince Brendan Perry (Dead Can Dance) to contribute on a few songs of the album and what did you ask him to play or did he got total freedom on the songs?

Aret: Brendan is a friend. We met about a year and a half ago when he moved to France. Since then, we’ve been seeing each other. During one of Brendan’s visits to our place in Normandy, we were listening to the demo versions of the tracks from our new album while having drinks in our studio. He spontaneously suggested some ideas for a couple of the tracks. When Beatrice and I re-visited Brendan at his place a month or so later, he recorded his parts on “Escape” and the percussion programs on “Autumn Sun”. He also suggested I record the string sections for the song “Escape” in his studio with the better string samples that he had.

We have lots in common musically as well as on many other topics. We enjoy each other’s company and have a wonderful time each time we get together. Brendan is a great musician and a well traveled, cultivated human being. Great qualities as far as I am concerned. His participation to the album happened very naturally, with complete freedom. There was no convincing involved. It is our friendship and our appreciation of each other’s work that was the engine.

Q: You always had difficulties to define your music as any particular genre, but is it not just the meeting between different artists with a different cultural background creating a diversified and eclectic sound?

Aret: I am not very good in defining my own music. Sometimes people are much better in describing our music than I am. I also understand the need for it on many levels and I have no problem with others trying to define our music. What I can say is that it certainly belongs to a family of music, a lineage so to speak. The more dreamy, surreal, eccentric and eclectic side of things. It is not commercially driven at all and it has never been. It comes from a profound and sincere place from within us. It is a time slower, an honest friend you can be with when you are all alone…lol

Since you’re here … … we have a small favour to ask. More people are reading Side-Line Magazine than ever but advertising revenues across the media are falling fast. And unlike many news organisations, we haven’t put up a paywall – we want to keep our journalism as open as we can. So you can see why we need to ask for your help. Side-Line’s independent journalism takes a lot of time, money and hard work to produce. But we do it because we want to push the artists we like and who are equally fighting to survive. If everyone who reads our reporting, who likes it, helps fund it, our future would be much more secure. For as little as 5 US$, you can support Side-Line Magazine – and it only takes a minute. Thank you. The donations are safely powered by Paypal.
Tags: Deleyaman, Psyche