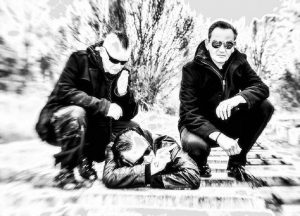 The band name Darkness On Demand (DoD) will for sure evoke one of the most famous electro bands from the 90s: Dance Or Die! Same initials and… same members! This is a new band set up by Gary Wagner, Falgalas (Heike Duus) and Chris L. They all have a great experience as musicians and performers and are still involved with different music projects. The debut album “Post Stone Technology” released on Repo Records is a well-crafted piece of modern and dark EBM. Gary Wagner give us more details about this new challenge.

Q: I first of all have to ask you why you finally decided to stop Dance Or Die and move on as Darkness On Demand plus what are the main differences sound-wise between both bands?

Wagner: Actually it was not on purpose. After some bad experiences with the former producer we decided to produce our new material ourselves. We kept Dance Or Die as a legend, but keep our lifetime achievement. Darkness On Demand is meant to be fresh modern and club orientated by staying to our typical sound.

Q: Is there a concept/philosophy hiding behind this new project?

Wagner: It mainly concerns the same themes sort of dark future and ‘Endzeit’, but it is also about personal experiences with the music monkey biz. In fact we started something new by keeping our musically roots.

Q: What is the album “Post Stone Age Technology” all about and what are the different aspects from the production you especially take care of?

Wagner: As I already said it is about apocalyptical aspects. We decided to create much more catchy melodies and grooves to transport our themes on the dark dancefloors.

Q: I noticed an interesting and somewhat ‘different’ approach in sound between the first EP “City Of The Dreamers” (which still has an epic & medieval touch reminding me of Winterhart) and the album, which sounds more electro/EBM-like. How comes and what can you tell us about the content of this EP?

Wagner: I am really surprised about this comparison. Winterhart is our other project that gets you more into the neo-folk thing. Darkness On Demand is an absolute electronic conclusion of our Body Music and Dark Electronic past. The same producer and the same voice so that could be the only reason for any paralel.

Q: The song and title of the new EP “Back To Psychoburbia” clearly is a wink to the Dance Or Die album “Psychoburbia” (1992). Is it also a kind of ‘look back’ to the earlier years of your music career and what do you think about all evolutions that happened?

Wagner: The evolution is more a revelation. The new media are a great way to become fame, but it also changes the music market not for musicians best. The “Psychoburbia” thing is my personal story about moving to the city and moving back to the subs.

Q: The album reflects a rather ‘dark’ vision about the future, but how do you see your own future as band, musicians and simple citizens?

Wagner: I have no idea about future those days. Everything is changing so fast. I believe that science fiction is going to become reality.