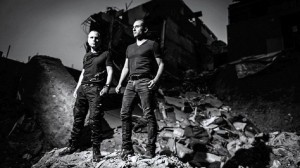 Arian1 is an ‘old’ electronic duo from Peru. Set up in the early 90s by Eduardo and Cesar Leiva they started to experiment with electronic music. The Russian label Razgrom Music this year released a ‘best of’ opus entitled “Integration”, which features 17 songs from the bands career. This is a perfect opportunity to discover a real talented formation. I got in touch with Eduardo to get a bit more info and background about the band.

Q: Living in Lima (Peru) how did you get in touch with electronic underground music and what incited you to set up Arian1?

Ed: Due to wave parties, friends, music collectors, and DJs we in school set up a garage synth-pop band called Aero Balance (that was somewhere around ‘87-‘88). We at that time had the opportunity to get in touch with hi-tech samplers and drums machines, but that project dissolved in 1989. In between ‘89 and ‘92  I played the drums in 2 local rock-underground bands doing covers while my brother Cesar did the same in other underground projects. But some day in October 1992 we decided during a meeting to start a new electro project with powerful beats, just to explore new sounds, nothing that serious by the way.

Q: Arian1 is a rather surprising name for a Latin American formation as it refers to an ‘old’ European (French) rocket. What does this name means to you and is there any possible link with a fascination for space?

ED: That’s right. During the same meeting we discussed about the name of the new project, but at the same time we wanted to choose something related to technology. We thought about a space carrier, which is one of the most advanced technologies of humanity, so space for us has been always a source of inspiration. We also decided to choose a name inspired from a old rocket and not a ‘super famous American’ one, but one relatively new for the common people, so we had a look at the French Space program and his agency ‘Arianespace’.

Q: Can you briefly analyze your evolution in sound from the early work till your newest composition(s)?

Ed: At the beginning we started to experiment with synth-pop sequences, but at the end of the day we mixed that sound with EBM-industrial. We are talking about 1992 and there was no internet or PC available at our studio, but just full hardware so our sounds were very raw in the early days. Then in 1994, we accomplished 12 tracks with lyrics in English and Spanish and the sound became very basic future-pop like. In 1999 our sound made a big move towards electro-minimalism. In 2008 we get back to a solid future-electro-pop format, We now think that our sound is a mix of many electro sources from the 90´s and the most current tendencies of electronic-alternative music.

Q: The recently released album “Integration” is a kind of ‘best of’-album revealing multiple cool songs, which have been remixed and remastered. What means this album to you and what did you try to improve/change in the remixes and new mastering?

Ed: The “Integration”-CD is a very important resume for us. When you listen to the 17 tracks you could travel in time very fast and identify many songs belonging to the 90s while the rest is more into a current sound. So it is a good piece of history of the band. The CD was remixed and re-mastered at our studios to improve the original sound and become more powerful compared to the original CDs while we also did a few changes in the sequences.

Q: One of the main facts in your career definitely was to play at the famous ‘WGT’ festival in Leipzig (back in 2011), which is without a shadow of doubt the most famous and legendary festival for electro underground music in Europe. What did you keep in mind from this festival and the reactions to your music here in Europe?

Ed: It was an amazing show, like a dream that came true because we come from far away and offered a unique performance. So that means a lot to us. The people were fantastic, there was a lot of good energy and we got an unforgettable feedback. I remember only the first and the last song in slow motion while I remember the audience holding their hands in the air!

Q: What is the electronic underground scene in your country all about and how do you look to the scene here in Europe and the US?

Ed: It’s a rather small scene. From time to time there’s a particular international special event. When it comes to electro-underground music there’s a rather active scene in the Southern part of Peru, but we don´t have that much festivals. We mostly have small parties and shows in discotheques. About the US, we never have been there to play with Arian 1, but thanks to some friends living at the East- and West Coast we know that there’s a very special market, but not that big compared to Europe when it comes to electro-future-EBM styles.

We consider Europe as the ‘MECA’ to play the music we love, but unfortunately we are very far from there.