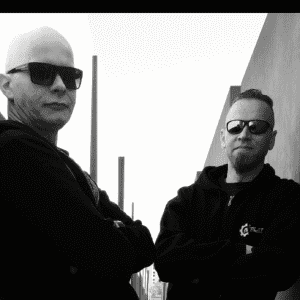 Q: I noticed Akalotz is celebrating its 10th anniversary! How do you look back at 10 years of Akalotz and what have been your greatest accomplishments so far?

Thorsten: When we started with Akalotz 10 years ago it was initially only a side-project in which we wanted to express our affinity to EBM. Later on it became the most important project in our lives. There were several changes during this time, so instruments were often replaced to create the typical Akalotz sound. In addition and in the beginning, there was an important change in the line-up. Alex left the band and was completely replaced by Nico. In 2013 through various Youtube videos and the presence on Facebook, we were able to play at the family meeting in Sandersleben. This was the beginning of our intensive tour and the release of 2 albums plus remixes for friendly bands. The biggest achievement up to now was in our opinion the new album which has 16 tracks.

Q: You’ve just released your second official full length album “Confront”. What kind of album and sound did you’d in mind when starting the composition and how did it finally turned out?

Thorsten:  After the release of our first album “Shift To Evil” in 2014, we had already started working on new songs, which were collected initially and partially tested live. Toward the end of 2015 we had already finished some songs including “No Signal Response”. A new label was also found so we had a road map at the end of 2015. By the end of 2016 the new CD should be finished with a playing length of approx. 75 min, this was our challenge.

However, we quickly realized that the ‘older’ new songs, due to our further development were not able to withstand. This was at the first moment a setback because at the beginning of 2016 only 2 songs remained lingering. A publication in 2016 could no longer be held. So we decided to publish the album in 2017 with Nader from (EAR). In the course of 2016, songs such as “Man On The Run” were created, which was originally intended as a title track for the album. Through the daily work on the machines came something like routine in the production which allowed us to produce faster and above all better songs than ever before.

At the end of 2016, almost the entire album was released and we knew that the CD would be ready by February 2017. Afterwards, the remixes went on the masters by Arnte (Pyrroline) and the artwork. “Confront” was born.

Q: I’ve been mainly impressed by the growing maturity in the global song-writing and production from your debut album “Shift To Evil” to “Confront”. Tell us a bit more about this evolution?

Thorsten:  As previously described by the daily work on the synthesizers and the computer, the experience and understanding of how to best produce this new album increased. Furthermore, it was just the logical consequence of “Shift To Evil”. For a band is a further development after the first album existential. Also, by criticizing the first album from different places we wanted to show Akalotz is more than just another act. In our opinion, “Confront” has become one of the best EBM albums of the modern era. Also thanks to the great work of Arnte who had mastering and mixing.

Q: What’s the importance of the lyrical content and what do you want to express by “Confront”?

Thorsten: Our songs are always about man and his environment. “Confront” is about the aggressive, essentially human being. The 16 tracks show it from a partly personal point of view or about things we see through media. There are religious aspects (cf. “No Signal Response” and “Rapt Tears”). We want to express that man is an unpredictable being that tends to self-destruction.

Q: Your new album has been released on Electro Aggression Records. What do you expect from a music label today and what’s your perception about CD-format, the ‘come back’ of vinyl, streaming platforms etc?

Thorsten: At the beginning of the new songs, we already had some labels that were interested to sing us. Ultimately, we decided to join hands together with EAR. Since we had the best chances to publish our album. A label is important because it also carries the risk of costs and is responsible for the distribution. A band may not have the resources and contacts to publish a release effectively. So we still see a label as very important today.

Unfortunately, the CD market is going downwards and the best example is the end of :Wumpscut:. Whether it is solely the streaming services, we dare to doubt. Therefore, we can’t demonize them. It is rather the listener who finally has the choice as he supports his favorite band. The comeback of the vinyl is super, we would also like to publish a vinyl, however, the production costs are too high for a small edition.

Q: You maybe remember we got in touch for a massive-interview I made about the international EBM-day. There was an interesting quote from you saying that EBM is ‘the rhythm of your soul’! What does that mean?

Thorsten: Music comes from the heart of the soul and we live the EBM totally. That’s what we wanted to say, without this we could not produce an album like “Confront”.