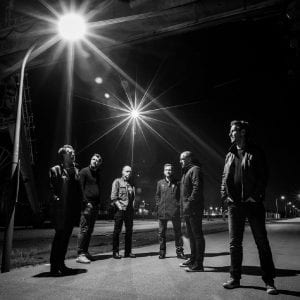 A Slice Of Life is Belgian formation that was originally set up by the duo Dirk Vreys (vocals) and Guy Wilssens (guitar). Quite rapidly the band has been joined by Wim Kempenaers (guitar), Nelson Da Silva (bass), ‘FIX’ (drums) and Bart Vanmeerbeeck (keyboards). The band deals with a very efficient mix of new-wave, post-punk and rock-wave music. After a self-released and self-titled EP they joined hands together with Wool-E-Discs unleashing the full length album “Restless”. I would be not surprised to see A Slice Of Life becoming one of the next Belgian ‘big thing’ in the alternative music scene.

Q: I noticed A Slice Of Life has been set up in 2016. Two years later you can already look back at a real interesting career with very positive feedback. What have been the main facts from the band’s ‘young’ history and what’s the secret of this instant success?

A Slice Of Life actually started late 2015 as an online collaboration between Dirk Vreys (vocals) and Guy Willsens (guitars). In 2016, we got the attention of several web radios who reacted very positively to our demos, which encouraged us to pursue our path. That same year, we decided to form a 6 piece live band.

In 2017, A Slice Of Life had its first gig and we released our demo-EP, which was followed by our full-length album “Restless” released in August 2018 on Wool-E-Discs. Since then, the album received lots of strong reviews in the press and we even were reviewed in the national newspaper. We also had the chance to perform at this year’s edition of the W-Festival. Actually we were booked before the band even had done its first gig or before we had an official release. We did not expect reactions to be so positive, so we are happily surprised.

Our songs are mostly inspired by the 80’s post-punk and new-wave bands, so every lover of the genre will find a song that reaches him or her, I guess this might be one of the reasons of our (relative) success in the scene. Plus the fact that both the faster as the slower songs all have some kind of catchy vibe.

Q: A Slice Of Life originally started as a duo and finally became a real band featuring 6 members. Who’s taking care of what and don’t you be afraid -or simply expect, members will come and go? I mean it’s damned difficult to manage a band with 6 members and maybe a crew around?

You are right that we didn’t choose the easiest way when we decided to form a 6 piece band. At the beginning, when we started as a duo, we just wanted to record and release as a project, but then we got more than curious to see how songs would go live. After doing a few rehearsals with the band members, we quickly realized our songs would reach their full potential with a complete live band. This is why we made this decision and we don’t regret it. We of course can’t tell what future will bring, but so far every band member has shown a real involvement in the band, which makes us confident in our current line-up.

Q: The name of your band is taken from a Bauhaus-song while the songs are clearly inspired by 80s cold-wave and post-punk. I should say ‘one more band you can add to the list’ so where’s the challenge and what are the most fascinating elements in the sound of these music styles?

Well most of us are well in our 40s so we grew up mainly with the 80s wave, gothic rock, post-punk so the music, the sound, the lyrics, the atmosphere from that time is what partially formed us as human beings. That does not mean that we did not listen or listened to other music but the 80s feel and sound is unmistakingly in our veins. Most people never get rid of their big influences from their youth as that is the period where you are very very open and everything is new. For us this is not any different.

The challenge is mainly to create songs which we like ourselves instead of trying to achieve to force and create a nostalgic vibe. A song needs to make itself and should and can’t be forced. Our influences help us as this is what we grew up with and like, but we never really compare with another band during the writing of a song.

We tried to integrate many different influences in the 11 songs that are included in the album, which resulted in various atmospheres and sounds throughout the album. We wanted the album to sound anything, but linear. 5 out of the 11 songs were previously released on our demo EP and have been fine-tuned in terms of production. The physical release includes a bonus track sung in Dutch “Liefde Is Oorlog”. As for the lyrics, they were all written by our singer and there is no theme for the album except that the lyrics reflect partially what life is about: the good, the bad, the ugly, the happy, the sad parts of life. We think they really reflect our band name very well. That is also why we think this album is so varied as well: not only between the songs, but even within the song there is a lot of dynamics music-wise, but also vocally.

We did not aspire to make an album where the songs are similar to each other in sound and in vocals. We liked to keep it interesting for ourselves and the listeners and we think we achieved that.

Q: I got the sensation “Restless” has been recorded in a very professional studio while it seems you recorded everything on your own and just asked some help for the mixing. Tell us a bit more the way you accomplished this ‘tour de force’?

As you mentioned, most instruments have actually been home recorded, except for the drums and some guitar parts that have been recorded in studio by Bart, our keyboard player, who is also a sound engineer. Besides, Koenraad Foesters (Jupiter Studio), who took care of the mixing and mastering process for the album, did an amazing job and played a key role. We were blown away when we first heard the mixed recordings. We are still today extremely satisfied with the result and his support throughout the whole process.

Q: You get very positive reactions and feedback here in Belgium –and more especially in the Flemish part of the country, but Belgium is just such a small drop in the ocean so what about the international scene and what will be the efforts to ‘conquer’ the international market?

We work without promoter or a booker, so it is not always an easy task to get a broader audience discovering us. We did receive very positive reviews of the album on webzines in different parts of the world, so we hope that slowly, but surely more and more listeners will get to know us. We noticed via our Spotify and also our CD-sales that in Poland and Germany they picked up on us and we signed our contract to be on the line-up at Wave Gothic Treffen Leipzig next year, which for us was a very pleasant, but unexpected request and something we can really look forward to. German magazines like Orkus and Sonic Seducer also started contacting us in the last weeks and it seems in Australia and South-America we also have some following.

It’s not easy for a new band to be heard nowadays, but we try our best and every help like we get from you by doing this interview is very much appreciated by us.