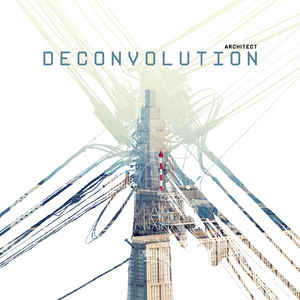 Background/Info: Architect (Daniel Myer) has already released an impressive discography since the very first productions in 1998(!). Daniel Myer is back again unleashing this new EP, which appears one year after his previous EP “Deconfiguration”.

Content: “Deconvolution” reveals 2 new tracks, which once again deliver the intelligent sound format of this artist. Heavy-banging beats mixed with overwhelming astral atmospheres and this very particular approach in sound treatments are here again characterizing the work of Architect.

Among the 3 remixes of the title song you’ll notice a real special one by Canadian sound-architects Orphx. There also is a remix of the previous EP title-track “Deconfiguration”, which once again reveals a technoid input mixed with the other influences of Architect.

+ + + : “Deconvolution” is an absolute smasher as the new title-song. It reveals Daniel Myer in good shape, once again mixing irresistible sound treatments and hard-bouncing kicks. Both new cuts stand for an impressive sound production. Among the remixes I have to tip the “Doggystyle”-edit of the title track. It’s a fascinating fusion between anguishing sound atmospheres and terrific beats. The “R Version” is another interesting remix for its acid sound treatments. Orphx did a great job as well transposing “Deconvolution” into a darker- and minimal approach.

– – – : This EP shows Daniel Myer at his best so no real reasons to complain here. This is a new masterpiece from Architect!

Conclusion: Architect never seizes to evolve and refresh its sound. This is a great and intelligent production, which will also get you into dance!

Since you’re here … … we have a small favour to ask. More people are reading Side-Line Magazine than ever but advertising revenues across the media are falling fast. And unlike many news organisations, we haven’t put up a paywall – we want to keep our journalism as open as we can. So you can see why we need to ask for your help. Side-Line’s independent journalism takes a lot of time, money and hard work to produce. But we do it because we want to push the artists we like and who are equally fighting to survive. If everyone who reads our reporting, who likes it, helps fund it, our future would be much more secure. For as little as 5 US$, you can support Side-Line Magazine – and it only takes a minute. Thank you. The donations are safely powered by Paypal.
Tags: Architect, Orphx, Technoid