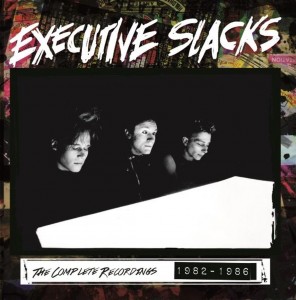 Cleopatra Records has announced they’ll be releasing an exhaustive 2CD collection of the complete recordings by the Philadelphia based industrial/goth act Executive Slacks on July 10. “Complete Recordings 1982-1986” is a 2CD collection that gathers the band’s entire recorded catalogue including 22 of the 36 songs appearing for the very first time on CD.

The Executive Slacks were formed in the 1980s in Philadelphia (USA) and were fronted by lead Matt Marrello on guitar and vocals. He was replaced in 1987 by Athan Maroulis until 1991 when the band broke up. The other band members were Bobbie Rae, John Young and Stuart Levy. Their album “Fire and Ice” (1986, Cleopatra records) included a cover of “Rock and Roll” (written by the convicted paedophile artist Gary Glitter).

Since you’re here … … we have a small favour to ask. More people are reading Side-Line Magazine than ever but advertising revenues across the media are falling fast. And unlike many news organisations, we haven’t put up a paywall – we want to keep our journalism as open as we can. So you can see why we need to ask for your help. Side-Line’s independent journalism takes a lot of time, money and hard work to produce. But we do it because we want to push the artists we like and who are equally fighting to survive. If everyone who reads our reporting, who likes it, helps fund it, our future would be much more secure. For as little as 5 US$, you can support Side-Line Magazine – and it only takes a minute. Thank you. The donations are safely powered by Paypal.
Tags: Cleopatra Records, Executive Slacks