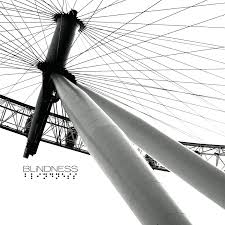 Content: Blindness is one more great band I discovered from the Saint Marie Records roster. This is a trio from London, which clearly sounds like the offspring between pop elements, new-wave and shoegaze.

I guess there was no better match for Blindness than joining hands with Saint Marie Records for this great production. There’s a fine and judicious mix between pure new-wave elements and fuzzy shoegaze parts. This band will clearly appeal to lovers of The Jesus And The Mary Chain who still are fond of dream-pop experiments. Blindness mixes both elements together with an extra psychedelic flavor on top. I’m sure it will still appeal to lovers of Curve, Catherine Wheel and My Bloody Valentine. The link with Curve is not that much of a surprise as Debbie Smith played in Curve. I’m sure the sound of Blindness will appeal to many music lovers as it showcases many influences and styles. Some of the songs are pretty indie-like as well, but always achieved by a darker sound flavor.

The guitar playing is for sure one of the main elements of the music, but there also is a nice harmony with the sensual vocals of Beth Rettig and the constant slow cadence adding an extra sexy element to the work. The electronic arrangements add a great and somewhat psychedelic noise touch, which reminds me a bit of some 60s electronic experiments.

There’s a lot to experience on this sonic trip, but I have a preference for the explicit inspired shoegaze cuts carried by fuzzy guitar parts. The previously released EP title-song “Last One Dies” is a cool song in the genre, but the best one in my opinion is “Humming Song”.

Another tip is “Broken” where the vocals reach the ultimate level of lust. The final track “confessions” is more into guitar, but here again there’s a fine and sexy psychedelic touch emerging at the surface.
My only regret about this album is that it is rather short in duration featuring 9 songs and only 35 minutes of pleasure.

Conclusion: “Wrapped In Plastic” no longer only will remind me of the legendary “Twin Peaks”-series of David Lynch, but is a real great and sexy album!