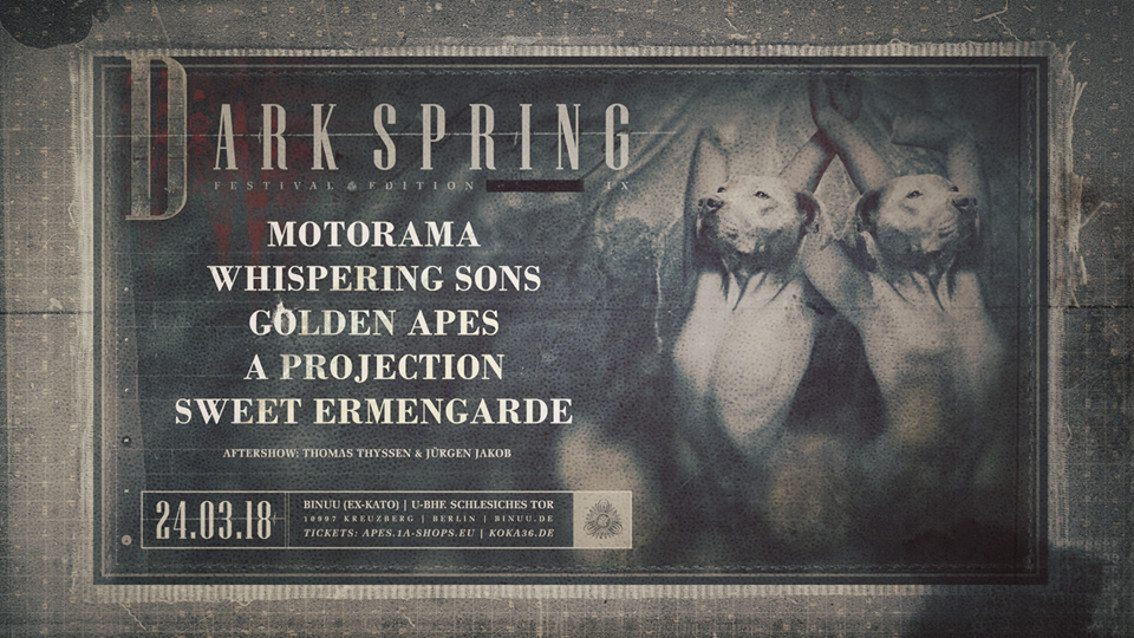 Fans of dark, atmospheric guitar music should add the 24 of March 2018 in their agenda as Golden Apes will host the 9th edition of the Dark Spring Festival at the Berlin-based Bi Nuu Club.

Playing live will be Motorama (RUS), Whispering Sons (BE), Golden Apes (DE), A Projection (SWE) and Sweet Ermengarde (DE). For those of you which don’t know Motorama, the band is by far the best-known representatives of the Russian Post Punk/New Wave scene.

The festival will continue in the late hours with DJs Thomas Thyssen (Pagan Love Songs) and Jürgen Jakob (Cold Beat Berlin) with a mix of goth, wave, post-punk and indie-classics.

Since you’re here … … we have a small favour to ask. More people are reading Side-Line Magazine than ever but advertising revenues across the media are falling fast. And unlike many news organisations, we haven’t put up a paywall – we want to keep our journalism as open as we can. So you can see why we need to ask for your help. Side-Line’s independent journalism takes a lot of time, money and hard work to produce. But we do it because we want to push the artists we like and who are equally fighting to survive. If everyone who reads our reporting, who likes it, helps fund it, our future would be much more secure. For as little as 5 US$, you can support Side-Line Magazine – and it only takes a minute. Thank you. The donations are safely powered by Paypal.
Tags: A Projection, Berlin, Bi Nuu Club, Dark Spring Festival, Golden Apes, Motorama, post-punk, Sweet Ermengarde, Whispering Sons