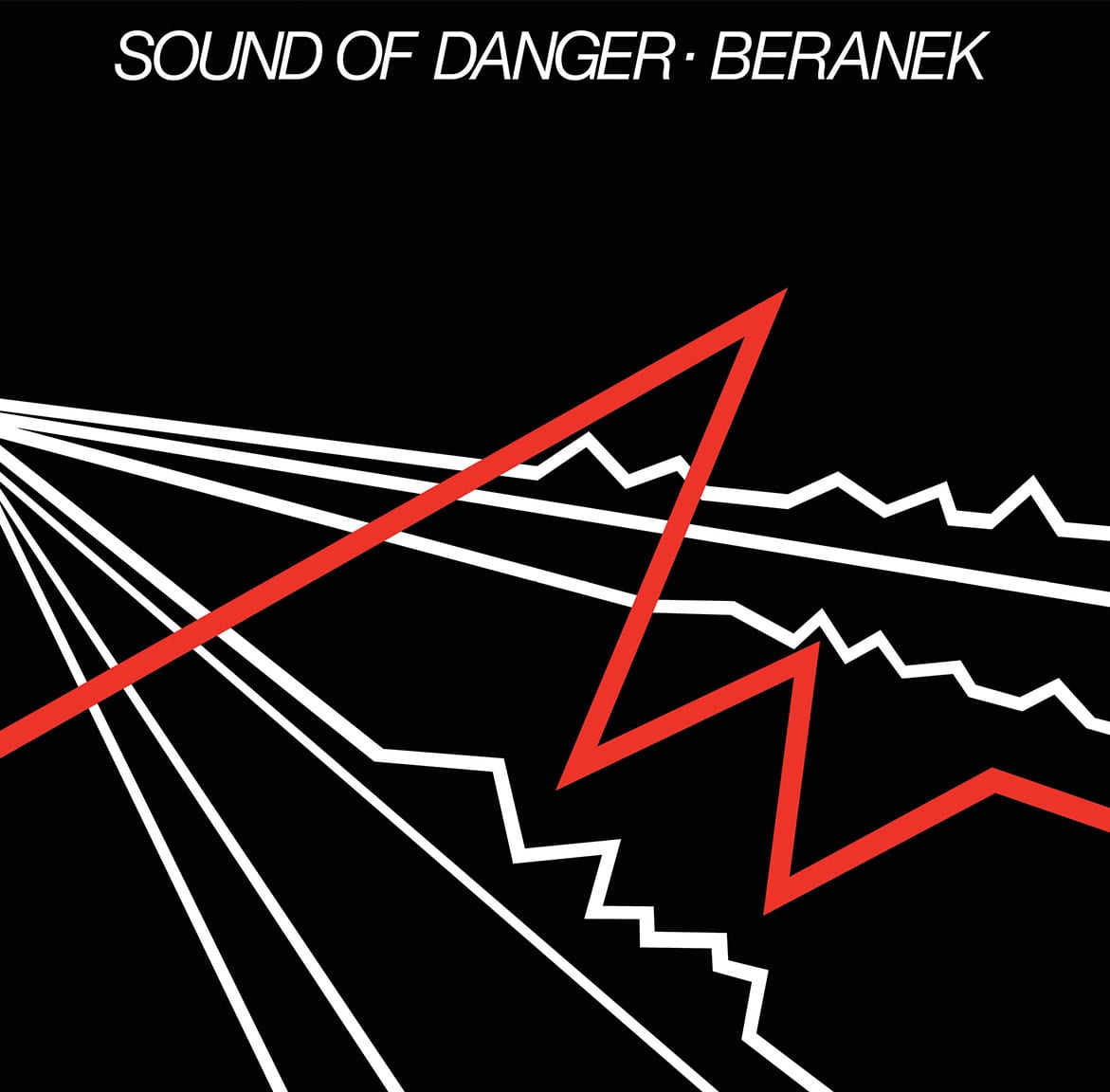 (By our Norwegian correspondent Jan Ronald Stange. Photos by Einar Låker and Jan Ronald Stange)
The seasoned Norwegian entertainer, comedian, stage-, radio- and TV-personality Espen Beranek Holm has also had a music career spanning nearly four decades. Besides collaborating and participating in more than twenty releases with other projects and band, he also got a dozen releases with his solo project Beranek to his name. Many Norwegians still remember his booming debut single with the controversial, anti-drugs song “Dra te hælvete” (“Go to hell”), which got banned from radio after being played just once, thus becoming a chart hit for months and the top selling single in Norway in 1981. 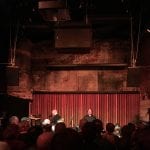 Two weeks ago the ‘Laboratoriet’ stage at Kulturhuset in Oslo was the venue for Beranek playing his 1981 debut album ‘Sound of danger’ in full, analogue glory, joined by Johannes Winther Farstad.
Me and my friends managed to steal a few minutes after the concert to have him elaborate further about what just had taken place, leaving everyone in the audience with big smiles as they left the venue.

Side-Line: Was there a particular reason or occasion that led up to doing a concert now?
Beranek: It was the ‘Synth Geek Night’ event at Popsenteret last year where I was asked to join a panel and talk about synths. There’s nothing I like to more, so I gathered some synths and got very inspired as I was patching the old stuff, hearing the old sounds again and singing again with my synths.
(Me and lots of friends also attended this event, here’s a taster)
I realized this was actually feasible, and the reason I hadn’t done it before was because I’d mostly been involved in more standard rock’n’roll setups with drums, bass etc., not leaving much room or possibilities for this kind of synth setup.
This album were composed and recorded using machines, so it needed to be performed with machines too! What was important was to conceptually do it right; I could have had a laptop and lots of soft synths in Cubase or something, but it felt more true – and more fun – to the music by doing it as close to the original as possible!
We programmed bass and drummachines beforehand, the rest we played live, some almost like in the studio when recording the songs, moving presets, trigging pulses etc.
Old school, but it felt right.

S-L: Yes, we noticed what seemed like mix of old and new equipment on stage. Were some used in the 1981 recording sessions?
B: The instrument line up for the record included the Korg PE-1000, an Elka string ensemble, two Korg MS-20 and the Korg KR55 rhythm-box. For this concert I wanted to recreate the analog idea, while having more control and flexibillity over the live production.

I brought my old Korg PE-1000 (which is quite important in order to re-create the Sound Of Danger Album) and my good old Roland SVC350 vocoder, but all the other synths were «new». I was playing a Korg Prologue, a Korg Minilogue (driving the SVC350) and a DSI Tempest while Johannes Winther Farstad had his fingers running on two Moog Sub37s, a Mellotron M4000D, a DSI OB-6 and the Korg PE-1000. In addition to the DSI Tempest I had two Moog Mother 32, an Arturia Minibrute 2S, a Make Noise 0-Coast and a Roland TR-08.
So the only instrument playing on both the record and the concert is the Korg PE-1000. A truly unique instrument. 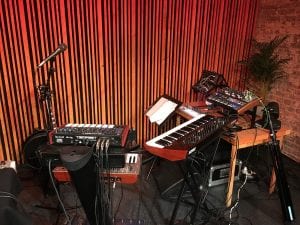 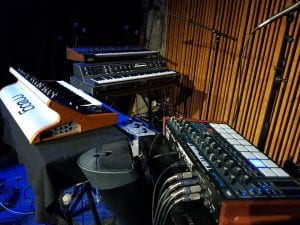 All instruments were running custom patches, except from the Mellotron of course. It’s presence represented the only digital sample playback instrument, but then I think that’s just a modern version of the original Mellotron idea. And I still love that sound!

The MS20 is great synthesizer, but I favoured the Moog Sub37 for the concert. It is a more flexible unit, and it sure has more to offer in both the low end department as well as in the modulation matrix. And it’s programmable… We needed a lot of patches tonight.

S-L: Will there be more concerts like this? And longer…?
B: I haven’t planned for anything more than this one, but with the whole album and the additional two songs (not as extras, but as warm up!), it felt right as is became approximately an hour. And I meant what I said near the end – I really wish that this had been a triple album when I released it – it was that fun to play like this again!

S-L: Must have been lot of preparing for a gig like this?
B: Yes! Lots of rehearsals, pre-production, patching and getting re-acquainted with the old gear, really something you can’t decide days before and wing it. It’s a year ago the idea surfaced, I pondered on it for a while, contacted Kulturhuset, and six months ago we announced it. It takes time on all levels.

S-L: The show was filmed by NRK (Norwegian public broadcasting) – will it appear on TV?
B: Yes, it was filmed, but no definitive plans at the moment – we’ll see what we can do with the recordings.

S-L: Is there another album in the making?
B: I’m always writing and composing in-between other jobs, but I would like to make a follow-up of “Sensitive Dependence” (the previous album). What I’m working on now is even more electronic, but still with beats. No definitive release plans or dates, but maybe next year…

The 1981 album is available in remastered version on vinyl at Juno Records (UK/Europe) and Dark Entries Records (US). Also on CD (and vinyl too?) in Norway from Retro Vinyl.
In the meantime stream it from Spotify and iTunes.

A small taster of the concert – hopefully it’ll end up at a TV screen soon!

Since you’re here … … we have a small favour to ask. More people are reading Side-Line Magazine than ever but advertising revenues across the media are falling fast. And unlike many news organisations, we haven’t put up a paywall – we want to keep our journalism as open as we can. So you can see why we need to ask for your help. Side-Line’s independent journalism takes a lot of time, money and hard work to produce. But we do it because we want to push the artists we like and who are equally fighting to survive. If everyone who reads our reporting, who likes it, helps fund it, our future would be much more secure. For as little as 5 US$, you can support Side-Line Magazine – and it only takes a minute. Thank you. The donations are safely powered by Paypal.
Tags: Beranek, Espen Beranek Holm, Kulturhuset, oslo, popsenteret, Roland