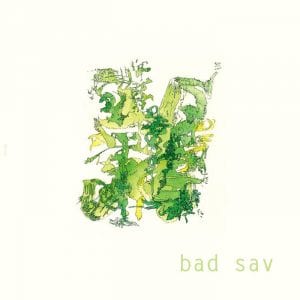 Background/Info: Bad Sav features Hope Robertson and Lucinda King (both involved in the cool band Death And The Maiden) plus Mike McLeod (Shifting Sands). This self-titled album has been released on Fishrider Records (Australia) and Occultation Records (UK).

Content: It’s not an easy thing to define the sound of Bad Sav, but the New Zealanders are clearly inspired by shoegaze. The songs also have something cinematographic-driven. There’s a kind of sweet sadness emerging from the songs. Both female singers Hope and Lucinda inject a sweet and somewhat shimmering flavor to the work, which is embraced by melancholia.

+ + + : This is a rather sweet interpretation of shoegaze music while the darker and sad passages could clearly be used as a soundtrack. The guitar playing accentuates the melancholic taste of the work, which is perfectly matching with the shimmering vocals.

– – – : I’m missing a few highlights on this album. It all sounds easily listening-like, but a few –and maybe harder cuts (like “Labradoodle”) are a bit missing.

Conclusion: “Bad Sav” has something delicate and sweet while the vocals often feel like a caress, but it also reveals a darker, tormented and intriguing side.