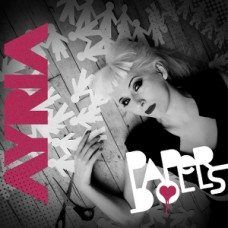 The album has been released in different formats, but the fans will be especially pleased by a special edition featuring a CD and a vinyl.

Content: Ayria remains pretty faithful to her familiar sound, which is mixing EBM and electro-pop music. Both influences are pretty complementary creating this ‘industrial-pop’ feeling coming through on numerous songs. The previously released EP “Feed Her To The Wolves” was a cool introduction to this album.

One of the most noticeable evolutions appears to be the impact of Seb Komor on the sound of this album. It all remains pretty Ayria-like, but the magic touch of Komor comes through with his heavy bass lines and the way he transformed sounds into a rough and technoid industrial dimension. Jenn Parkin plus Seb Komor is a winning team where the initial pop style of Ayria has become heavier and elaborated throughout the years. “Paper Dolls” is not exactly something new, but it’s one of the few artists mixing pop and a naughty industrial sound.

+ + + : There’s a fine and subtle harmony between rough and powerful sound treatments at one side and great melody lines at the other. I guess it perfectly summarizes the chemistry between the artist and her producer.

There’re numerous potential hits on this album while the bonus disc of the limited edition features a few more exclusive cuts, alternative mixes and cool remixes by bands like BhamBhamHara, Decoded Feedback and the unavoidable Seb Komor.

– – – : I think that Ayria can be still more powerful and industrial minded, but the sound would maybe become too Seb Komor-orientated. Song-wise the title track is one of the few cuts that doesn’t satisfy me.

Conclusion: “Paper Dolls” is a kind of sonic transposition of “The Beauty And The Beast”; on one side you have the sweet and passionate Jennifer Parkin and at the other side the rough, tough and demanding Seb Komor. If the true story of this fable ends in a tragic way, “Paper Dolls” is probably the most accomplished work of the Canadian industrial-pop diva to date.

Best songs: “Crash And Burn”, “Chameleon”, “Deconstruct Me”, “Feed Her To The Wolves”, “Underneath The Water”.