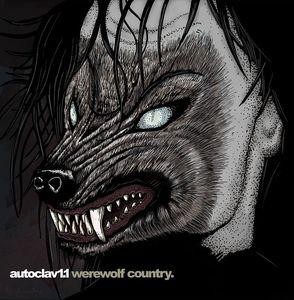 Content: Autoclav1.1 became one of Side-Line favorite’s when it comes to speak about IDM and other intelligent formats of electro/industrial music. Mastermind Tony Young accomplished his 10th full length in a rather short lapse of time, with his debut album “You Are My All And More” being released in 2005.

I was wondering what “Werewolf Country” would sound like and I can already tell you I wasn’t been disappointed. Tony Young moves a step further in the exploration of electronic music. Globally speaking he holds on the IDM-format mixed with electro-ambient atmospheres while he definitely digs deeper towards the path of cinematographic music.

The album mixes evasive and somewhat surprising passages, which have been emphasized by warm synth layers. “Tall Tails And Hate Trails” will really take you away into a world of the imagination. But the visual strength of this work can also move into more familiar and poignant darker passages. The title song is a chilling experience in the genre.

I’ve always admired Tony Young for his great skills in manipulating sounds and that’s an element he likes to expose on several cuts. He sometimes makes me think to an icy version of Biosphere and I especially refer to “Amitriptylene Nun Chuff” as the most significant track, which features fine piano-like arrangements. “Earworm” is another cut to watch out for. Most of the songs are driven by slow rhythm patterns, which accentuate the beauty of the electronic layers.

A few more experimental tracks remain pretty soundtrack-minded as well, but the last part of the album definitely is the most convincing. Autoclav1.1 here moves into more elaborated sound fields, which mix dark-reverie and a part of mysticism, mainly exposed at the final song “Just Do One”, which features female chants. I also have to mention “Constructive Dismissal” for its scratching electronic manipulations and “Twaddle” featuring low-vibrating sound blasts.

Conclusion: “Werewolf Country” appears to be one of the most intimate productions by Autoclav1.1. The cinematographic approach featured at the previous work “Ten.One.Point.One” seems to have been seriously developed resulting in a poignant electro-ambient format.