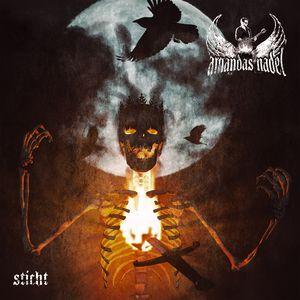 Content: Amandas Nadel seems to be a recognized guitarist in Germany and his homeland Austria. He has been involved in bands like Roterfeld and Lolita Komplex and 2 years ago he decided to do his own thing.

The sound has been defined as ‘German-rock’ and/or ‘Neue Deutsche Härte’. I was a bit afraid to discover the album as I’m not exactly a fan of German rock-minded productions. I can already tell you “Sticht” took me by surprise and mainly because of the great guitar playing of this artist.

Amandas Nadel plays the guitar and sings while he has been joined by a few more artists to achieve this work. The debut sounds pretty powerful bringing a mix of rock, metal and new-wave music. The guitar playing is one of the main noticeable elements and the main strength of this composition. There’s a lot of diversified, which from song to song covers different influences. It often sounds pretty rock-like with some metal touch on top. It works well on songs like “Vampir” and “Die Wahrheit” revealing an impressive solo passage as well. The accessible goth-metal inspired “Männertränen” is another essential song while “Wie Du Willst” coming next moves towards heavier fields and explicit metal inspiration.

The last part reveals 2 interesting ‘dance’ remixes. This is the little surprise on ”Sticht”, but still a clever move to push Amandas Nadel to conquer electro clubs. The so-called “Dance Remix by Amandas Nadel” of “Vampir is pure lust. Next to the outstanding guitar playing this song has been remixed by efficient electronic arrangements, which makes the song ultra clubby. A similar formula can be heard at the remix of “Der Schwarze Mann”, but this one is not as high as the dance-level of “Vampir”.

Conclusion: I already discovered many ‘typical’ German rock/metal-orientated bands on Echozone, but Amandas Nadel definitely is one to keep in mind. “Sticht” is an interesting production for the great guitar playing.