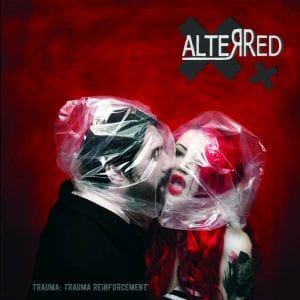 Background/Info: Three years after their last album “In The Land Of The Blind”, London-based AlterRed are unleashing their second full length on WTII Records and already their fifth opus in history.

Content: The work has been introduced as a reflection as the hostile world we’re living in. It has been transposed in a rather enraged production, which might remind you of early NIN-productions. The guitar parts never have been that menacing, but the global power emerging from this work is for sure a quite noticeable aspect. The cover version of Duran Duran’s hit “Wild Boys” symbolizes this sonic evolution.

+ + + : This is for sure the heaviest and most aggressive work by AlterRed. The furious guitar parts will appeal to fans of NIN, Ministry and co. This work stands for pure rage, which is perfectly illustrated on cuts as “Wait For The Recoil” and “Breaking News”.

– – – : AlterRed has considerably evolved in sound and influences. It’s maybe their best work to date although not exactly the most original one. It might be the start of a new sonic path they’ll move on with.

Conclusion: AlterRed is doing their own thing; it’s maybe not the most innovative work, but the power perfectly reflects the hostile world they’ve been inspired by and, which can be resumed into one of the album titles “PS Fuck You”.

Since you’re here … … we have a small favour to ask. More people are reading Side-Line Magazine than ever but advertising revenues across the media are falling fast. And unlike many news organisations, we haven’t put up a paywall – we want to keep our journalism as open as we can. So you can see why we need to ask for your help. Side-Line’s independent journalism takes a lot of time, money and hard work to produce. But we do it because we want to push the artists we like and who are equally fighting to survive. If everyone who reads our reporting, who likes it, helps fund it, our future would be much more secure. For as little as 5 US$, you can support Side-Line Magazine – and it only takes a minute. Thank you. The donations are safely powered by Paypal. Alternatively you can also donate using Cryptocurrency if you want to donate just once. [crypto-donation-box type="tabular"]
Tags: AlterRed, Ministry, NIN