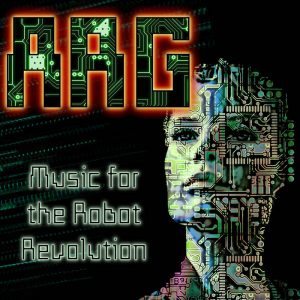 Background/Info: Alphane Reality Generator (ARG) is an American formation unleashing their self-released debut opus. They deal with a sci/fi concept about robots ruling the world in 2040 and who have send a message as a warning to all human living in 2017.

Content: The sound is driven by hard kicks and technoid arrangements. ARG deals with a futuristic vision, but the sound takes me somewhat back to the early 90s and the industrial rave style from the Frankfurt scene. The songs have been filled with numerous little bleeps. The work sounds raw while progressively evolving towards more familiar dark-electro standards, which might remind me of an offspring between Noisuf-X and Stahlnebel vs. Black Selket.

Some cuts feature EBM-elements (like the bass lines) and strings support the composition. Most of the vocals are robotic-like, but you’ll also notice more familiar harsh and powerful vocal parts.

+ + + : The work is diversified, covering multiple influences referring to the past and to contemporary standards. I like the progression from more technoid sounding songs towards a rather classical dark-electro format. Some cuts might appeal to lovers of Noisuf-X although it’s not as hard and more technoid.

– – – : ARG still has to find its own sound. This album rather sounds as an elaborated (and promising) try-out, which now has to be improved. I don’t have anything against robotic vocals, but there’s some abuse here.

Conclusion: Alphane Reality Generator is an interesting newcomer, which however has to grow and improve some elements of the production. I however would recommend keeping an eye on this band because it’s a successful debut!

Since you’re here … … we have a small favour to ask. More people are reading Side-Line Magazine than ever but advertising revenues across the media are falling fast. And unlike many news organisations, we haven’t put up a paywall – we want to keep our journalism as open as we can. So you can see why we need to ask for your help. Side-Line’s independent journalism takes a lot of time, money and hard work to produce. But we do it because we want to push the artists we like and who are equally fighting to survive. If everyone who reads our reporting, who likes it, helps fund it, our future would be much more secure. For as little as 5 US$, you can support Side-Line Magazine – and it only takes a minute. Thank you. The donations are safely powered by Paypal.
Tags: Alphane Reality Generator, Noisuf-X, Technoid