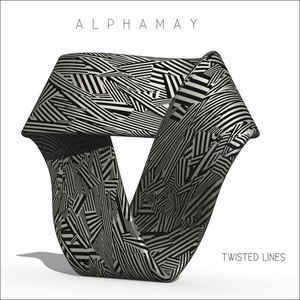 Background/Info: Alphamay is a German duo dealing with electro-pop which has released their debut album “Twisted Lines” earlier this year.

Content: The album reveals 11 songs characterized by a clear fascination for electronic-pop music. It moves from ‘classical’ synth-pop music reminding me of early Depeche Mode towards harder pop compositions touching some EBM ground. There’s a constant retro-touch in the background of their work, which I’m sure will appeal to lovers of 80s synth-pop nostalgia.

The singer has a rather deep timbre of voice while singing in a rather passionate way. It creates a great match on the ‘harder’ cuts. But he also sings in a more whispering way on ‘softer’ passages, which are also pretty danceable.

+ + + : “Twisted Lines” is not exactly the most original release in the genre, but it’s a well-crafted and successful debut work revealing a nice twist between good-old synth-pop standards and body-pop cuts.

– – – : The album is missing a hit, which would make the album really interesting. Alphamy has now released a single of “Silence Emotion”, which in my opinion is not exactly the song with the hugest potential.

Conclusion: It will be not easy for Alphamay to find a place under the electro-pop spotlights although this work features some nice cuts.

Since you’re here … … we have a small favour to ask. More people are reading Side-Line Magazine than ever but advertising revenues across the media are falling fast. And unlike many news organisations, we haven’t put up a paywall – we want to keep our journalism as open as we can. So you can see why we need to ask for your help. Side-Line’s independent journalism takes a lot of time, money and hard work to produce. But we do it because we want to push the artists we like and who are equally fighting to survive. If everyone who reads our reporting, who likes it, helps fund it, our future would be much more secure. For as little as 5 US$, you can support Side-Line Magazine – and it only takes a minute. Thank you. The donations are safely powered by Paypal.
Tags: Alphamay, EBM