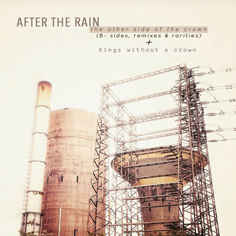 Background/Info: After The Rain is a Spanish electro-pop trio hailing from Madrid. I discovered the band by the album “Kings without A Crown” originally released in their homeland on Amuza. They now have joined hands with Russian label Scentair Records releasing this opus, which features the already familiar album (here released on the second disc), and the album “The Other Side Of The Crown”, and which also includes the 3 digital EP’s released by the band plus some new remixes and rarities.

Content: If you don’t know After The Rain, you maybe better can start listening the 2nd disc. You’ll discover electro-pop music, which sounds pretty ‘classical’, driven by catchy electronics, fine tunes, cool effects, refreshing bleeps and empowering guitar. The vocals have been sung in English. The work clearly sounds inspired by bands like Depeche Mode and Erause while there also is a little wink to the legendary “Da Da Da”-hit from Trio.

The 2nd disc takes off with a cool cover version of David Bowie’s “Heroes”. Among the other ‘new’ cuts I especially noticed a great and somewhat technoid and into breakbeats cut entitled “Nancy In Hell”. I have to admit I never heard the content of the EP’s which were self-released by the band. It brings an interesting diversity to the work, sometimes more club-orientated. Remixes were made by artists like Cyborgdrive, Insight, Conmutadores, Nature Of Wires.

+ + + : If you’re not that familiar with After The Rain, this album will definitely appeal to all electro-pop lovers. This band reveals a great maturity and this little genius to compose alluring electro-pop music. Even if they’re inspired and driven by some old pioneers, the work also features a personal touch. From calmer and evasive cuts to more danceable clubs, this work has a lot to offer. After The Rain has a nose to write great melody lines and carrying choruses.

– – – : It maybe is a pity why so many bands always go back to pioneers like Depeche Mode, Erasure and co. I’m sure this band has enough potential to create their own electro-pop DNA!

Conclusion: After The Rain is definitely a band deserving a wider recognition in the electro-pop universe. I’m really looking forward to hear new stuff.

Best songs: “Future Will Be fine – ITCN Mix”, “Cosmic Mission – Electric Bass Single Version”, “Insane feat. Indight”, “Invincible (You Are The One)”, “Lost Without You – Nature Of Wires Remix” + “Invincible”, “Future Will Be Fine”, “Wir Sind After The Rain – Cyborgdrive Remix”.