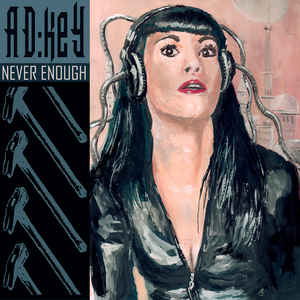 Background/Info: Andrea- and René Nowotny better known at the EBM community as AD:keY became without a shadow of a doubt one of the hottest and simply best body-bands from the past few years. After the last year released “Reanimator”-album and their special “10th Anniversary”-compilation opus released earlier this year, they’re already back in business with this new EP.

Content: The title song and opening cut “Reanimator” gets us back to the “Reanimator”-album. “Elitär” originally released on the band’s debut album “Thema Nummer Eins” (2008) has been remixed in a new version. The last featured song Pfeil In Dein Herz” was a new song featured at the “10th Anniversary”-album.

All the songs have been remixed while “Never Enough” got a special treatment. Next to the “Radio Edit”, “Extended Peace-Mix” and “Hackfreeds Oldschool-Remix”, the song has been also remixed by Angriffspakt and Massiv In Mensch.

+ + + : If AD:keY is simply one of the most talented EBM combos it’s simply because of their old-school EBM, which is masterly composed. This is a great production carried by solid bass lines, danceable rhythms, carrying choruses and passionate singers. There’s no song to throw away and AD:keY often succeeds in realizing better remixes than the original versions. It means that the songs are constantly improved. This is powerful and efficient EBM.

– – – : It’s not the first time I expected a bit more out of the remixes done by other artists.

Conclusion: This EP is meant to please the DJ’s and the die-hard fans, but no doubt about it the AD:keY fan bases is constantly growing. This is a new ‘hot-sweat & sexy’ body release.