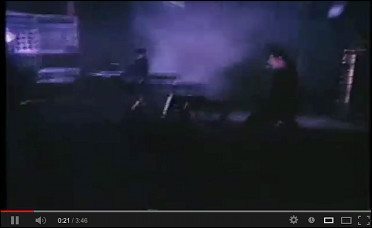 This 80sObscurities was founded by DJ Rexx Arkana to showcase old, often unknown or forgotten acts and tracks from the decade when electronic music was truly the new wave. Rexx Arkana has been a club/radio DJ and promoter since the mid-80s and headlined festivals on several continents and currently holds a residency at DEFCON, NYC’s current longest-running weekly scene party. He is also the founder and lyricist of Brudershaft and one half of harsh electro act FGFC820.
Today’s 80sObscurities selection goes out to photographer and friend Lüke Haughwøut, who started off my morning yesterday with a conversation about Moev and Nettwerk Records. In my former life – from 1987 until around 2000 – I ran my own college radio and club promotions company, originally called Club Hate Productions and later renamed RazorBurn. In fact, I first met several known artists in our scene when they were teenaged specialty show disc jockies at college radio, but I digress. Nettwerk and Wax Trax! were two of my favorite clients, along with the long deceased Reconstriction Records, mainly because it was easy to promote music that I actually loved.
Boston-based Manufacture absolutely fits that bill. Originating as more a sound design project than a band, the act was comprised of musicians Brian Bothwell and Perry Geyer. Nettwerk signed them and issued two albums and about half a dozen singles from 1988 through 1991. Today’s track has the distinction of not only being the first 12″ from the band, but also for including a guest appearance from vocalist and label mate Sarah McLachlan. It’s hard to believe, but this year marks the 25th anniversary of the release of this song…and it sounds as good today as it ever has. Enjoy.