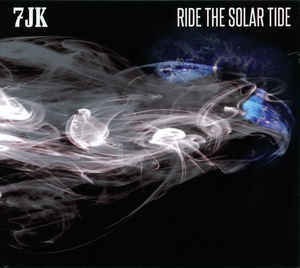 Background/Info: 7JK is the fusion between Sieben (7) and Job Karma (JK). This Half British, half Polish formation released the debut album “Anthems Flesh” in 2012. The new opus only features one member from the Job Karma duo. 7JK now is Matt Howden (Sieben) and Maciek Frett (Job Karma).

Content: It’s nearly impossible to define the genre of this album, which consists of Matt Howden on vocals and playing his violin on one side plus Maciek Frett taking care of the electronics on the other. It’s an accessible experiment resulting in some dreamy and poignant songs revealing Matt Howden’s charismatic and passionate vocals.

Some of the songs are driven by a rather slow and sensual cadence, which makes it all very enjoyable. There’s a kind of magic operating between both musicians. Notice by the way that the last song features female guest vocals by Hanna Stubbs.

+ + + : “Ride The Solar Tide” is a beautiful album with a perfect balance between the magic of the violin and the electronics. The down tempo together with the electronic treatments and multiple sound effects are sometimes reminding me a bit of Björk. “Guidance Is Eternal” is a remarkable song in the genre. But I also fully enjoyed the sensuality emerging from “Barry The Astonishing” and especially “Undergrowth”. Matt Howden is a musician who likes to work with other artists, but “Ride The Solar Tide” definitely is one of the most successful albums.

I also have to say a word about the beautiful digipak format revealing a dreamy and somewhat surreal artwork.

– – – : “Ride The Solar Tide” is hard to label and that’s maybe why some people will ignore this little sonic treasure.

Conclusion: Side-projects between artists is always fun, but not as convincing. 7JK must be one of the exceptions to the rule “Ride The Solar Tide” being an accomplished composition featuring many beautiful songs.