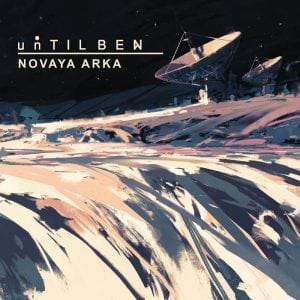 Background/Info: I discovered this French producer with the album “The Ray”, which featuring an eclecticism of experimental, jazz, electro and pop music. “Novaya Arka” reveals 5 new cuts by the artist.

Content: It remains a real mystery to define the sound of Until Ben. The influences have evolved towards electro-ambient and psychedelic music. It sounds space-like and totally hypnotic through the psychedelic influence. I also noticed electronic sounds reminding me of a clarinet and trumpet. Next to instrumental tracks the work also features spoken-like vocals and samplings.

+ + + : Until Ben remains a very personal exposure from a musician who clearly doesn’t care about established music genres. He’s just doing his very own thing, which rather sounds as the offspring between multiple influences. I like the psychedelic touch, which is mainly emerging at “Sensual Trouble” while “Shift Delete” is a cool ambient-driven cut.

– – – : The main strength of this work also is the little minus. It’s impossible to label this project, which might be a problem to catch the attention of a wider audience. At the other side it definitely sounds atypical and original, but unfortunately not groundbreaking.

Conclusion: I still do believe Until Ben is a producer with original ideas, but I think he needs to find a more defined and cohesive sound.