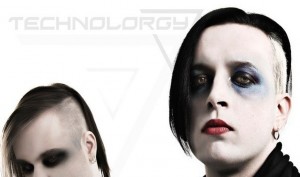 Originally released in digipak at the end of 2012, the Greek dark electro duo Technolorgy now reissues their debut “Endtimes in vogue (endzeit edition)” as a 2CD release strictly limited to just 100 copies. Included in the bonus CD are 2 previously unreleased tracks and 7 previously unreleased remixes.

The 2CD set comes in a jewelcase inside an outer O-Card including a new booklet with previously unused artwork material and photos. Get one of these 100 copies right here!