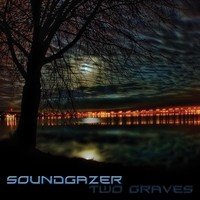 Background/Info: Soundgazer is a Canadian trio based in Toronto featuring ‘artists who believe in challenging the parameters of today’s music industry’! “Two Graves” is their fourth album.

Content: The work rather appears to be a mini-album of 6 songs. There’s an explicit pop-inspired element that rapidly emerges at the surface. It sounds somewhere in between indie-pop and pop-rock music. Most of the songs are well-crafted and accomplished by noticeable electronic treatments.

The female vocals are delicious, sensual and absolutely elevating. The male vocals left me rather skeptical. The songs are pretty enjoyable, but without a real climax.

+ + + : The female vocals appear to be one of the main forces of this work, which is also characterized by solid electronics.

– – – : The male vocals can’t captivate me. Some guitar passages could be harder and more carrying.

Conclusion: “Two Graves” is an easy listening work, but without apotheosis.