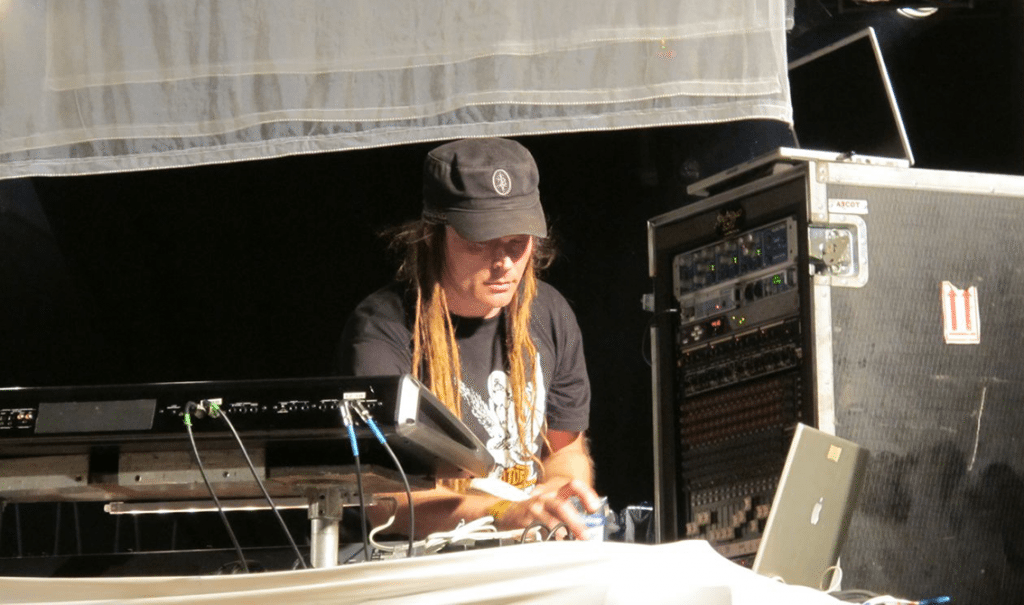 cEvin Key (born Kevin William Crompton) is a founding member of the Canadian industrial-electro band Skinny Puppy. He has been involved into several side projects including Doubting Thomas, Cyberaktif, Hilt, Bananasloth, Scaremeister and Download and was before active in the new wave band Images in Vogue as percussionist. cEvin will bring live music and visuals on the Kaiju -vs- Modular electronic event in Tokyo next month.

Speaking of which, make sure to collect these Download and cEvin Key releases on CD and vinyl!

SL: How long ago did you buy your first keyboard ever? Which technology did it use (MIDI, 3.5″ floppy disks, …) and do you still own it?

cK: First keyboard was a Moog Multimoog, analog synth, pre MIDI. I got it about 1982 and still have it. I had a Roland TR-808 before that and Pollard Syndrums, so it wasn’t my first piece of gear.

cK: I mainly use Logic synced to the room and all clocks, I also like Renoise sometimes. I use an Apple Macintosh, though most of our earliest Skinny Puppy stuff etc., up until the new albums, we used an Atari 1040 ST with Steinberg Pro 24 sequencer, very primitive!

cK: Basically everything we’ve used we practically still have here. So it’s a list too long to go into. There is a wall alone that is the orginal setup of Skinny Puppy, based around a pair of Roland TR-808’s, Roland TR-909 with trigs going to many differnat devices including Sequential Circuits Pro One, Roland System 100m, ElectroComp Eml 101, Korg SQ-10, Korg MS-20, Korg MS-10, ARP 2500 and ARP 2600.

cK: I have used a lot of different things throughout time, again too much too list. Lately I’ve been using a Roland V-Synth to use as a controller for mixing virtual synth with its architecture. I also have a Moog, Teenage Engineering OP-1 and various analog effects onstage including a hand triggered syncussion Pearl Syncussion SY-1.

cK: It’s hard to say one. I’ll say the Sequential Circuits Pro One.

cK: My riser collapsing mid song in Geneva 1988, all my gear crashing on top of me… was not good!

cK: I like both, wave synthesis and frequency modulation of digitally controlled oscillators are some of my most favorite timbres. For bass you can’t beat analog.

cK: There is way too much available for someone just starting. I can’t imagine how intimidating that must be. However most synths are really based on others and like music it’s up to the user to determine what’s right for them without getting lost in the music store. That’s why I don’t enjoy the new gear all the time philosophy. Just yesterday I was still studying the finer details of the Roland MC-202, which one tends to forget if you don’t stay on it. So generally it’s best to pick a certain piece of gear or two and focus on them instead of thinking of what’s new I could get to make it better. Generally that’s not the way to think.