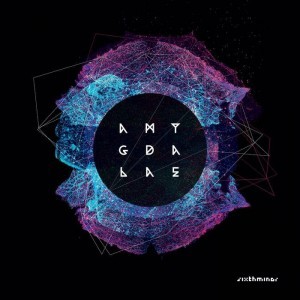 Background/Info: Sixth Minor started as a duo featuring Renato Longobardi and Andrea Gallo. They released a debut-album (cf. “Wireframe) in 2013 and later on started working on new compositions. They got joined by Francesco Giuliano who completed the line-up. “Amygdalae” is an imaginary trip throughout different structures and nerves of our body, which you can discover in the titles referring to these places in our body and our brains.

Content: Sound-wise this scientific-like trip has been transposed into an elaborated and progressive soundtrack-like approach mixing electronics and guitar. The songs have been patiently constructed till reaching phenomenal climaxes of dynamism and power.

It’s hard to define the sound of Sixth Minor, but there’s an apocalyptic electro-rock style hanging over the songs. Most of the cuts take off in a rather evasive and quiet way, but evolve into furious sonic layers. A few cuts remain ambient-like.

+ + + : “Amygdalae” is a creative production mixing different influences and which, is mainly characterized by a very progressive composition mostly ending in a true apotheosis. I like this slow progression and especially the impressive climax at the end of the tracks. There also is a good balance between the mainly instrumental passages, but sometimes interrupted by a few spoken words.

– – – : The main strength of this album probably also is its main imperfection. Sixth Minor is not composing the most typical music style and it’s not that accessible.

Conclusion: If you want to discover an atypical band with an avant-garde release you for sure have to taste “Amygdalae”. This is a fascinating trip through less familiar sonic fields.